Dollhouse's exotic beauty vamps out and bites into Being Human

Actress Dichen Lachman has found a home for her career. The exotic beauty, who made an impression in Joss Whedon's Dollhouse, is getting all kinds of work in sci-fi projects these days, and she's thrilled. In her latest gig she plays the vampire princess Suren in Syfy's Being Human, which airs on Monday nights at 9 p.m. ET.

"I'm very grateful that, I guess, in a way it just kind of works. Like, I love sci-fi, fantasy, and I fit into that world," said Lachman. "It's weird. People find it hard to cast me in real circumstances. I hope that changes, because I've always loved period pieces and I love the fact that on this show, because it is a fantasy, I actually get to exist in the [flashbacks of the] 1920s and '30s."

The actress was born to a Tibetan mother and an Australian father, which has given her an unusual look. "I love Deadwood, but I'd never be on that show," she said. Well, except in one circumstance. "I'd probably be one of the Chinese hookers that they throw into the fire, and that's about all I would be doing on that show. And it's sad, because I am half Australian and my father's family is European and I really respond to that ... I would love to explore that, but I can't."

"I love sci-fi/fantasy and somehow, thanks to Joss Whedon, I guess, I've made a little home there. And I hope I can continue to do this genre, because I love it. I love it, I think it's a wonderful place to play out ideas and opinions about the world today in a safe place."

For Lachman, she's been excited to read where the Being Human scripts have taken her character. And her role as Suren has given her something she's been wanting. "She's a very interesting character, and I had a lot of fun having the opportunity to play her. I mean, as an actor, obviously playing a vampire is one of the things on the list," she said. "She's incredibly complex, very damaged and reckless in many ways. But at the same time, she's striving to grow up and mature and be the woman that her mother would like her to be."

In the show's second season, Suren has been brought back after misbehaving in the 1930s and being buried for 80 years. Mother, who is her mother, has decided that Suren will run vampire business in Boston, and Sam Witwer's Aiden has been sucked back into the vampire fold as her second in command. 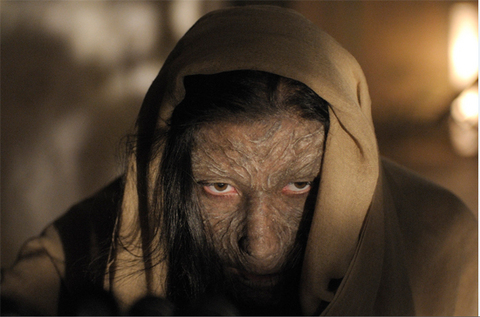 "She's one of those things that just keeps pulling him back into the world of vampires, which he's constantly trying to escape," said Lachman. "It's one of those, I guess, love-hate relationships. I mean, they had a very long history together. She's obviously been in the ground for 80 years, so minus that. ... They've just had a very complicated past, and I don't think their relationship has ever been consummated."

However, they have a strong attraction, said Lachman. "It's going to be interesting them being together. I think you guys will see in this modern world, she's been away for so long underground, and he's had the opportunity to go through all these changes and change his ways."

As for her Mommy Dearest of a vampire mother, Suren has a unique set of daughter issues.

"Suren's relationship with her mother is very complicated. She's always let her mother down, and anything she did was never good enough," she said. "It's one of those relationships which is very strained and there's a lot of love there and there's a lot of hate there, and resentment and disappointment. ... She can never do the right thing by her mother, and so sometimes she just doesn't even try. And then other times, she tries and then she fails. And it's just a very difficult relationship. I actually have a really wonderful relationship with my mother, so it was difficult to find something personal that I connected to bring that to life."

Lachman, who's going to be in seven of the show's 13 episodes, won't talk about her character's fate on Being Human. But judging by events of season one, things could go in just about any direction. She's just thrilled to be a part of the series.

"Even though it's a show about a vampire, ghost and a werewolf, I think it's very relatable. Everyone's trying to make a relationship work with a job and juggling different things that come up in their day-to-day lives. And I think people relate to the show. The characters are so fun and watchable and they have that balance of drama, but also that lightness," she said.

"Everyone struggles with a dark side, and they're always trying to do the right thing. ... We don't always manage, but I think most people I think are inherently good. And sometimes where there are a lot of good people who just aren't good at being a good person, but sometimes it's a push and pull like we all have it. And I think people relate to that, and it's a beautiful show. ... [It's a] lovely balance between tragedy and comedy."

So are you happy to see Lachman back in action on Being Human?