DreamWorks chief on why Shrek 4 will work; plus, 3-D!

DreamWorks Animation chief Jeffrey Katzenberg has been pushing 3-D—this year's hit Monsters vs. Aliens was the company's first such movie—but he says the upcoming fourth Shrek movie, Forever After, would work even without it: The movie's characters provide the extra dimension.

"For him, it's really appreciating the life that he now has, which is very, very different," Katzenberg said in an exclusive interview last week at the Saturn Awards in Burbank, Calif. "He is no longer an ogre in a swamp. He now has a family and children and a home. In the next movie, he has a midlife crisis."

The fairy tale series has fun with familiar storybook characters such as the Gingerbread Man and Pinocchio. Shrek 2 introduced Puss in Boots and the Land of Far Far Away. In Shrek the Third, a young King Arthur joined the clan.

"It's great," Katzenberg said. "People love these characters, and I think it's an opportunity for us to really continue to tell the story of Shrek and his life and how he's growing. I think the fourth chapter is pretty spectacular."

Katzenberg also confirmed that both a feature film sequel and a TV series based on the studio's hit Kung Fu Panda are in the works. The feature sequel is called The Kaboom of Doom. Katzenberg was confident the two media could exist side by side. 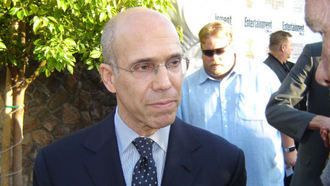 "Different stories," Katzenberg said of the sequel film and the TV series. "I think we've managed to sort of send them on unique paths so they complement each other."

With the success of Monsters vs. Aliens, Katzenberg is considering a rematch there, too. "Oh, maybe," he said. "We're waiting for it to finish its run internationally, and then we'll kind of sit down and figure that out. But it's been a great success so far."

At the Saturn Awards, Katzenberg received the very first Visionary award for his contributions to the growth of 3-D film technology. "I just think it's a wonderful acknowledgment of some amazing work that's being done in our industry and at our studio in this amazing new cinematic platform called 3-D," he said. "So I don't think it's really so much about me as it is about what is now sort of exploding, this new just amazing way to make and present movies."