It seems that writing Alien: Resurrection wasn't the only time Joss Whedon got to work in the Alien universe: The inclusion of one tiny logo—the Weyland-Yutani Corporation logo—in Firefly reveals that Ripley and Mal Reynolds could've gone drinking together.

In the opening sequence of Firefly's pilot episode, "Serenity," Nathan Fillion's Malcolm Reynolds is fighting the Battle of Serenity Valley. And losing. But before he's forced to lay down his guns, he hops behind a giant anti-aircraft cannon to shoot down an Alliance fighter. And when he powers up the gun, the heads-up-display reveals a very familiar logo in the top part of the screen: 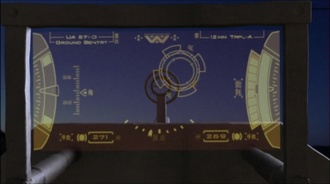 That logo looks a mite familiar, doesn't it?

Just like that, two of science fiction's most beloved universes become one. And I feel like a bit of a moron for not noticing it sooner.