Emily Rose: Jason Priestley was 'not a diva at all' on Syfy's Haven

Get ready for Haven a la Groundhog Day. On tonight's episode of the Syfy series, Audrey Parker's going to find herself reliving the same day over and over again, with a little Jason Priestley thrown in.

"Walking into that episode, I just knew that it was going to be one of the biggest emotionally challenging episodes I've done [from] a technical standpoint," said actress Emily Rose, who plays Audrey Parker. "You're doing a scene that's really, really emotional probably 12 to 15 times, and then on top of that, you need to have the technical DP or focus puller or grip or director talk to you through the scene in a technical way just to pull it off, but yet you still have to be freaking out, and even though your brain knows that it's not really happening, at the end of that week my body was so tense and so drained because my body thought that I had been through those traumas multiples of times. And so it was a real challenge but a real reward, and I really hope people are affected by it as much as I was when I played it."

6 ways the new show Haven gives you Stephen King goodness
Get ready for Evil Audrey: Everything we know about season five of Syfy's Haven

In the episode, "Audrey Parker's Day Off," Audrey wakes up after a night of romance with Chris (aka Priestley) only to end up stuck in the same day, each time with the pretty Haven cop struggling to change the day's deadly outcome.

Despite the emotional roller coaster, what was it like for her to make out with Jason Priestley?

"It was weird. I was like, 'Is this my life right now?' What's happening? Especially because I'd worked with Luke Perry before on John From Cincinnati, so it was just bizarre that I was like, 'What's happening with 90210 intersecting my life?'" said Rose.

Regarding Priestley, "There's always the mystery surrounding his name and who he is, and then we meet him in person and realize that he's super down-to-earth and really loves his family and is just really talented and super hard-working and is not a diva at all," she said. "You learn a lot from working alongside of someone like that that's very eager to work and make a good story, and so obviously it's always a little weird, but then you get over it and you move on."

While tonight's episode signals a realization for Audrey, the season is just halfway through, and there's still plenty of adventure for the Troubled people of Haven and for Audrey as she searches for her identity.

"There's an episode coming up that takes place completely in the woods, which is really, really creepy," said Rose. "There was a sunset that we were shooting there the day before our premiere date, and it was absolutely stunning and taking up the level of creepiness of Stephen King in that episode."

Additionally there's an episode that stood out for Rose that also involved "working with Jason Priestley. The one that he directed was really neat, and that was fun because his character came back for a little bit," she said. 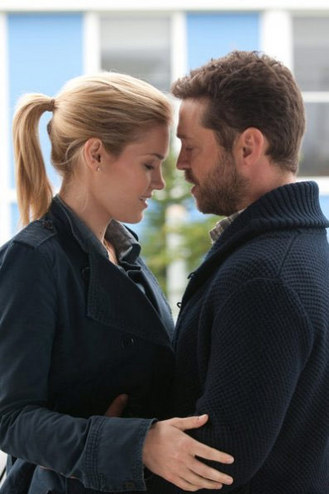 Regarding Audrey and her connection to her mysterious past and to Lucy, "You will understand why she doesn't really look that much like Lucy, and there will be a big, large Lucy development. One of my favorite parts of the season. So, yes, that is to come for sure," said Rose.

"I'm definitely looking forward to some moments in the finale and—with Vince and Dave and between Audrey and Nathan—that are some cool developments. ... Any kind of heightened emotion and high stakes and stuff that deals personally with the characters to me."

When it comes to Audrey's journey this season, "She's sort of hunkering down in Haven. I wonder if our season will echo the stages of grief? But I think the first season is this denial of 'What am I doing here?' and 'Is this really happening?' and 'Why am I here?' and the shock," she said.

"This season I feel like Audrey's pissed off about a lot of different things as a result of the information she doesn't know and the information that she finds out, and it's a balance of trying to continue to endear the audience to her and make everybody sympathize with Audrey and what she's going through, but also experience some really real emotions about what it feels like to continually get abandoned or not have the answers that you need or just be grasping at straws all the time.

"So I think ... oh, my gosh, and then the final moment of the finale just flashed in my eyes. It is huge, people, let me tell you. It is bigtime. So I'm very excited. I'm very excited. It's just more rug pulling out. We all love that. Where did that ... ? I did not see that coming, definitely [one of] those moments for her," said Rose.

Are you going to watch Audrey make out with Jason Priestley?