Roland Emmerich—the "master of disaster" filmmaker behind Independence Day, The Day After Tomorrow and the upcoming 2012—is aware that fans are anxious about his proposed adaptation of Isaac Asimov's beloved Foundation series of books and doesn't want to disappoint them. Emmerich plans a trilogy of movies.

For one thing, he knows that most Asimov loyalists hated the 2004 film adaptation of Asimov's I, Robot.

"They kind of pretty much changed everything, and I think the fans hated the movie," Emmerich said in a news conference in Jackson Hole, Wyo., last Friday, where he was promoting 2012. "So I didn't want to do that. But on the other hand, the Foundation, it's a similar problem, you know? There's all these short stories, which then later got combined in a book."

Like I, Robot, Asimov's first Foundation books were originally published as a series of short stories. Foundation is a complex saga about humans who are scattered on planets throughout the galaxy, living under the rule of the Galactic Empire. 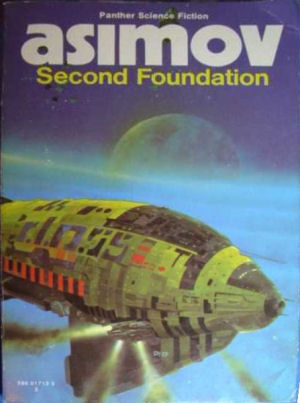 Emmerich says the challenge facing him and screenwriter Robert Rodat (Saving Private Ryan) is finding a throughline for the film. "There's not one character going through, so Bob Rodat came to me and said, 'I'm like a fanatic reader of ... Foundation,' and I ... talked with him. ... He said, 'We have to consolidate the characters.' And that's what we did, and that's what's worked really, really well in the context. And I think that if Asimov ... would have ... conceived this as a science fiction trilogy or series from the very beginning, he would have done that, too. But he didn't. ... I think in spirit [the movie is] totally Foundation, but it has consolidated characters which go through the three movies."

In an exclusive interview, Emmerich talked about what inspired him about the series. "Well, it's the same thing that Asimov was inspired by," he said. "Just the downfall of a great civilization and how you can stop it. And you cannot stop it, it's just inherent. ... As a civilization crumbles, it falls."

Emmerich adds: "When you read it, ... you see all of a sudden how many other science fiction sagas it has influenced, you know? From Star Wars to Dune, all these things are pretty much influenced by Foundation, which was the first of its kind. Which poses a little bit of problem, but it's definitely something ... which you can sink your teeth in. And I was very happy that it became available."

Emmerich also understands the skepticism about him as a filmmaker tackling such a complex and beloved story. But he defends himself as a science fiction geek first and foremost. "Yeah, I know the material, and I was always like more inclined to do science fiction movies than to do disaster movies," he said. "It's just has happened to be that my first ... success here in America was called Stargate. ... At that time I actually wanted to do with [producer] Dean [Devlin] two more Stargates after that. But because ... the theatrical rights and the video rights were, like, divided in two companies, it was never possible. ... I'm always drawn to the big science fiction epic, you know, and just want to do one. And also because it's in some totally created society, it's very interesting for me."