Though it was a risky little sci-fi film back in 1977, Star Wars has become one of the biggest, and most lucrative, franchises in film history. So just how much cash has George Lucas' opus generated?

Not surprisingly, a whole lot of money. The folks over at Wired have put together an awesome, Millennium Falcon-shaped chart showing just how much everything from toys to box-office take have generated over the years.

The total? A whopping $33 billion.

Check out the graphic below: 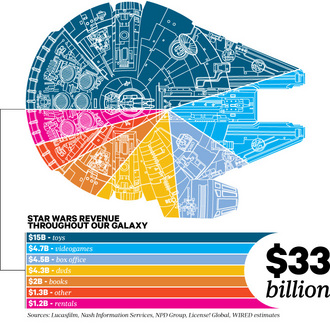 It's neat to see just how much Star Wars has made over the years, and who would've thought toys alone have accounted for $15 billion? That's a whole lot of plastic Death Stars.