Some actors might get a call from their agent about starring in a modest-budget vampire movie written and to be directed by neophyte Australian brothers—and hang up faster than hell. But not Ethan Hawke. He got exactly that call about Daybreakers, co-directed by Peter and Michael Spierig (Undead). Hawke agreed to meet them at a New York City cafe near his home, heard their pitch, signed on and ventured to Australia for the shoot, and the resulting film opens today.

"To be honest, when I got this script it was 2007," Hawke said in an exclusive telephone interview. "I was doing a Tom Stoppard play in Lincoln Center, and the play was about mid-19th-century Russian radicals. Twilight (and True Blood) hadn't come out yet. So this seemed like the most original damn idea I'd ever heard of. It seemed so retro to do a vampire movie. If I'd gotten the script today, I'd probably be thinking, 'No way I'm doing a vampire movie.' But the funny thing is, whatever the given genre—if it's a cop movie or a western or a vampire movie—these things are never new. It's just whether or not you have something new to say."

This Week in Genre History: Daybreakers lit the way for a different sort of vampire story
The Black Phone calls up a Sinister reunion; Scott Derrickson casts James Ransone to join Ethan Hawke

And the Spierig brothers, Hawke felt, had something worthwhile to say. "They are these two twins from Australia, and they have the same kind of glint and passion in their eyes for movies that all the best directors I've ever worked with do," said Hawke, a two-time Oscar nominee. "They had something original that they wanted to do with this thing, and I liked it." 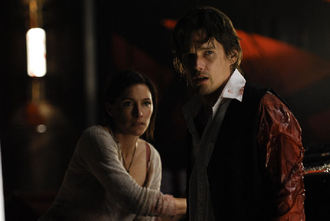 The film is set in 2019. Humans are a dying species, and, thanks to a mysterious plague, vampires represent the primary population. They lead seemingly normal lives, but all is not normal on the fringes. Human blood is in short supply, and starving vampires are starting to feed on other vampires, transforming them into fearsome, bloodthirsty creatures referred to as "subsiders." Meanwhile, vampire researcher Ed Dalton (Hawke), watched closely by his boss (Sam Neill), is desperately trying to create a blood substitute. Ed then encounters a group of human survivors and falls in with them. One of them, Elvis (Willem Dafoe), is a human who became a vampire, but somehow became human again. If Ed can figure out what happened to Elvis and re-create the circumstances, perhaps he can "cure" the vampires and save humankind.

Hawke, in describing what he found original about Daybreakers, shared an anecdote about making his first film, the Joe Dante-directed Explorers. Hawke was 13 when he shot the sci-fi adventure film, which was released in 1985. 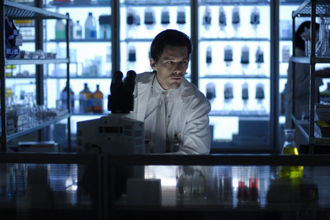 "I had a huge education doing that movie," Hawke said. "Quentin Tarantino exploded about 10 years later, and he started teaching everyone about a love of genre movies, but Joe was one of the last real directors to get their start from Roger Corman. Joe had been a real mentor to me. He taught me about the artistry in these movies, in John Carpenter movies, in movies that people generally regarded as pulp. And what made one really good was a little bit like punk rock, whether it had a subversive message. You could actually do something really powerful. Joe had done The Howling and Piranha, and he'd just had a big success with Gremlins. So it could be done."

Hawke added, "And when I read the script for Daybreakers, the idea that was so original and subversive to me was that there were more vampires than there are people, and we're destroying the planet. The vampires are trying to get off foreign blood and develop new blood supplies. The metaphor for how we are destroying our planet is pretty clear, and the whole allegory of it becomes a lot of fun. It just kind of sings. At the same time, the movie is about 10 miles from pretentious. It actually works as a genre film, and it has something to say, which appealed to me."