TV THIS WEEK: H.G. Wells is BACK, Futurama turns 100 and more

This week, Tia Carrere returns to Warehouse 13, the Scream Queens try comedy, the Ghost Hunters head to the zoo, Zahi runs into bats in Chasing Mummies, Leela leads the mutants in Futurama, Claire and Dylan take their revenge in The Gates—and it's season-finale rerun time for The Vampire Diaries, Smallville and Supernatural.

The bad news is that, thanks to the Labor Day weekend, originals for Eureka, Haven and Being Human and True Blood's big finale are absent from the schedule. The good news is that if you wait a week you'll see the start of the fall season with originals on The CW and Syfy.

Good news, everyone! Futurama star says cast members are open to possible reboot: 'We all talk about it'
Bite our shiny metal list of Futurama's top 10 running jokes and catchphrases

The girls get zombie-fied!

This week the actress wannabes embrace their inner comics as they take on the humorous, campy side of horror and attempt to outlive the other contestants to score that ultimate role in Saw 3D.

The team heads to Russia in the hunt for the person who murdered a colleague using artifacts from Artie's past. Meanwhile, H.G. Wells makes an offer the team may not be able to refuse, and Claudia looks into Todd's past and is surprised by what she finds. Tia Carrere returns as Agent Katie Logan.

It's a weird and freaky sneak peek:

On the Cartoon Network's Unnatural History (8 p.m,), it's up to Henry and the gang to clear his uncle's name and find a Viking artifact when Bryan's old partner is murdered in "Thor's Slammer." And on Discovery's The Colony (10 p.m.), while trying to survive after a viral apocalypse, the Colonists discover their water source is contaminated in "Skout."

Lions and tigers and ghosts! Oh my!

The GHI team heads to Philadelphia to investigate America's oldest zoo, where they explore underground passages and spooky buildings in "America's First Zoo."

It's a thumpy sneak peek:

On the History Channel's Chasing Mummies (10 p.m.), the colorful Zahi decides to explore caves under the Giza Plateau in an effort to disprove a theory about underground passages to the Sphinx. However, the thousands of "Bats" that inhabit the caves make an impression on him.

With the new season of The Vampire Diaries beginning next week, here's a chance to watch the season-one finale, which is filled with death, destruction and one heck of a cliffhanger. Season two begins Thursday, Sept. 9.

The 100th episode and the last original Futurama until December! 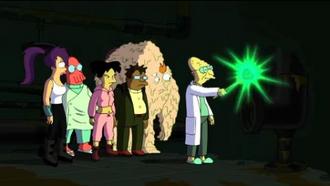 Oh, no! Say it ain't so! ... Alas, it is so. In the 100th episode, and last original episode until December, Leela takes on the battle for mutants' rights by leading an army of underground mutants against those above ground in "The Mutants Are Revolting." Features the mutated members of Devo.

The History Channel's The Universe (8 p. m.) explores "Asteroid Attack" and the potential threats they pose to Earth. Then, on Stan Lee's Superhumans (10 p.m.), the "Human Wolf" is profiled, along with the psychokinetic Miroslaw Magola and balancing artist Eskil Ronningsbakken. And ABC's NightlinePrime: Secrets of Your Mind—Why We Do What We Do (10 p.m.), Terry Moran reports on the work of neurosurgeon Julian Bailes.

There's not much original content this weekend, so you might want to revisit Smallville's ninth season finale, "Salvation," which took care of Zod and left most of the characters' fates up in the air for the show's return for a 10th and final season on Friday, Sept. 24.

A repeat of the best Supernatural finale ever!

Here's your chance to catch not only the best Supernatural finale ever, but one of the best and most perfect season finales of any show ever. In "Swan Song," Sam and Dean finally have that date with the devil, and things don't go as expected. Supernatural's new season begins on Friday, Sept. 24.

Claire and Dylan take their revenge!

Considering True Blood is taking the week off, The Gates will have to keep your vampire cravings in check with this entertaining outting. In "Little Girl Lost," Claire and Dylan ask for Nick's help in locating their daughter, Emily, who was kidnapped by bad boy Christian. Meanwhile, Brett, Andie and Charlie continue to deal with the supernatural teen angst of it all.