Great news for fans of Fox's Human Target, which returns with new episodes next Wednesday, and Fringe, which comes back April 1: Fox honcho Kevin Reilly has said the network would like to bring both back next year. Yay!

Speaking with The Hollywood Reporter's Live Feed blog, Reilly, president of entertainment at Fox, said that "I'd like to bring [Human Target] back next year" and that the network will renew its Thursday-night block of scripted programming, which includes the sci-fi Fringe. 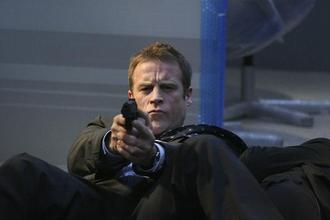 THR: I'm digging Human Target, but its ratings seem very on the fence.

Reilly: Unfortunately, our launch got all dumbed up on that. We started by getting screwed on the big football lead-in we were supposed to have on the launch night, then we had to double play it, and then the president bumped us from the time period. It was really all over the place the first four weeks. I keep hearing people say they like it, and I have my hunches that it's settling at 8 and is going to get hit by daylight-savings time, so I don't think the story is going to be in the numbers. But by the end of that run, we may end up with the perception that this is kind of an overperformer. I've believed from the get-go that there's something there, so that's a show I'd like to bring back next year. ...

Reilly: Yes, absolutely. I'm really looking at the back half of the year when we'll bring the combo back on again. "Bones" hit highs in January. People haven't abandoned "Fringe"; it's just the only scripted four-way race, and frankly we've heard from fans it's not they don't want to watch it anymore, it just may have moved to their second choice; they're picking it up on their DVRs or Hulu. When there's wiggle room in time period, they come back. ...

What about 24, which held its own against the Winter Olympics on NBC?

Reilly: It's a very tough call. It's a huge part of our legacy, and there's not a lot of shows that could do a 9 share against the Olympics. Tremendous sales asset for us still; a show we're so very proud of creatively. So it's not an easy call.

Are you holding out hope for these Fox shows?