You can never be too careful in an alien environment. Even when the potential threat is a human like you, the rules are different in the wilds of space.

Prospect, a film written and directed by Christopher Caldwell and Zeek Earl, tells the story of a father-daughter duo — Damon (Jay Duplass, Transparent) and Cee (Sophie Thatcher, The Exorcist) — as they explore a remote alien moon to mine a valuable gem on its surface. The two have managed to garner a contract, but that does little to protect them from their fellow prospectors. Soon enough, things go south, and Cee has to learn to navigate this strange new world and her own father’s ambitions.

The film garnered popular and critical support when it premiered at the 2018 South by Southwest Film Festival and won the Adam Yauch Hörnblowér Award, which is awarded “in honor of a filmmaker whose work strives to be wholly its own, without regard for norms or desire to conform.” You can watch the trailer here.

In this SYFY WIRE-exclusive clip, Damon and Cee come across Ezra (Pedro Pascal; Game of Thrones, Narcos), another prospector on the hunt for the same gem, and manage to turn the tables on him. The interaction devolves into a gun-pointing stand-off, one that speaks to the film’s Western roots and gives us a good look at the suits and helmets humans have to wear in this toxic environment.

Prospect premieres in theaters on Nov. 2 through Gunpowder & Sky’s sci-fi label, DUST. You can buy tickets and learn more about the film here.

Watch the exclusive clip below! 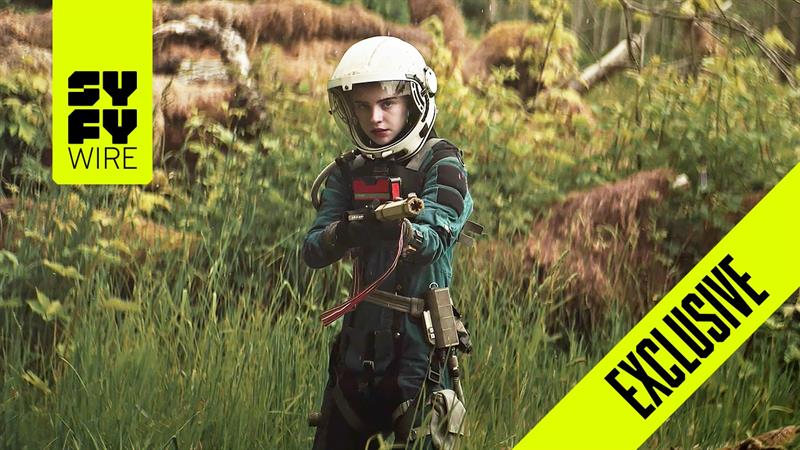