Exclusive updates on Star Trek, Transformers and Cowboys and Aliens

Writing/producing partners Roberto Orci and Alex Kurtzman updated SCI FI Wire on their various projects, including Star Trek, Transformers: Revenge of the Fallen and Cowboys and Aliens in an exclusive interview.

We talked with Orci in the corner of My House, a Hollywood bar open for only its second night of business, which hosted the Fox network party for the Television Critics Association winter press tour on Tuesday. Orci and Kurtzman co-created and co-produce Fringe for Fox.

Why was Cowboys & Aliens such a flop? Favreau blames bacon sundaes
Harrison Ford's 1st reaction to Cowboys script? 'I don't get it.'

The following Q&A features edited excerpts of the interview.

With regard to Star Trek, what would you say to fans who might take issue with portraying Kirk as a reckless youth, getting into bar fights with Starfleet cadets?

With those lavish, epic-looking space battles, is it safe to say they are no longer inspired by submarine battles?

Orci: It's safe to say that that has not been totally thrown away, but imagine super-advanced submarines. It still maintains some of the maritime origin battle-wise, either a sub battle or ship to ship, cannon to cannon, Master and Commander battle. Just, I think, on a different pace.

Some fans also take issue with the idea that they're building the Enterprise on Earth, instead of assembling it in space. Care to respond?

Orci: The response is that the Enterprise is not, nor has it ever been, a pleasure yacht. It's a ship that's able to warp space around it to several times the weight of gravity. So the idea that it somehow couldn't handle one Earth atmosphere of gravity was not something I think anyone who would board that ship would ever want to contemplate. The rationale for building it into space is when you have flimsy things that never have to be in gravity, but that's not what the starship Enterprise is.

Was it a major priority to work in a sword fight for Sulu?

Orci: You know, when you think of Star Trek, if you're a fan of the original, any one of us can kind of make a top 20 list of things you might see. I bet you a lot of our lists would be similar. There'd be a lot of overlap like that. Any fan could think of the top 20 things, and we tried to put as many of those things in the movie as possible.

And you got to show us the very first redshirt death.

Orci: Again, that's one of those things where if you're not a fan, you will learn that it's not good luck to be a redshirt. And if you are a fan, the minute you start to come into that sequence, you have an anticipation for what's going to come that nobody else has. That's one of the joys of having been able to tell this movie. 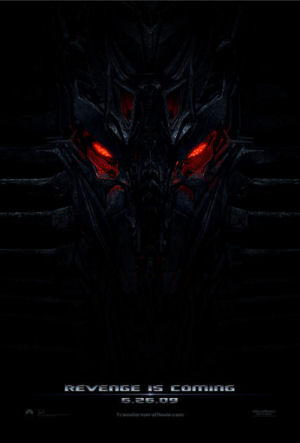 What can you tell us about Transformers: Revenge of the Fallen, the sequel to Transformers?

Orci: The second movie is like an extreme version of the first movie.

You must have finished before they started planning the IMAX shoot, but did you write anything that lends itself to IMAX?

Orci: I mean, almost anything that Michael Bay directs lends itself to IMAX. The treatment that we turned in before the strike was primarily about preparing the action sequences. So he and the amazing Ian Bryce had the ability to really plan some gigantic sequences that I can't imagine what they're going to look like in IMAX.

What else are you working on?

Orci: Transformers will come out a month after [Star Trek]. The Proposal is something Alex and I executive-produced. It's a romantic comedy starring Sandra Bullock and Ryan Reynolds that comes in between Star Trek and Transformers. Right now we're writing Cowboys and Aliens with Damon Lindelof, our co-conspirator in Star Trek [and executive producer of ABC's Lost].

What is Cowboys and Aliens?

Orci: It's a graphic novel that's been around for a while in which you mix the genres of the Old West with the science fiction of an alien invasion.

How many novels are there, and where do you narrow down your source?

Orci: There are a lot of graphic novels. You've just got to go through them and just see what inspires you, what grabs you and what seems to have good imagery that might translate into a movie. Some graphic novels maybe wouldn't make such great movies.

What inspired you about that one?

How far along is that?

Orci: We have an amazing first draft from [Mark] Fergus and [Hawk] Ostby, the gentlemen who co-wrote Iron Man. We're in the middle of doing a second draft with Damon Lindelof, and hopefully we'll have something in a couple months.

Will you be writing on it?

Orci: Yeah, Alex and I and Damon Lindelof.