Exclusive: Moon director Duncan Jones on his sci-fi inspirations and how he fudged science

Duncan Jones, writer-director of the indie sci-fi psychological thriller movie Moon, told SCI FI Wire that he wanted to create a film that was based in hard science, but knew he would have to fudge a few details in order to tell a better story. "There were certain things stylistically we had to make choices on," Jones said in an exclusive interview last week in Los Angeles.

"Basically there's a star field that you can see from when we're on the lunar surface," Jones said. "Obviously, the Apollo missions showed that you wouldn't actually see the stars, but we tried it without, and it just doesn't look right. It makes everything look like a model miniature, so even though it may be scientifically inaccurate—although you could say that with a certain kind of camera you might be able to capture an exposure which gave you the stars as well—but it was just one of those things where style had to take precedence over accuracy."

The film stars Sam Rockwell as Sam Bell, who's approaching the end of his three-year contract to mine the power source Helium-3 on the moon.

He's lived and worked alone on a lunar base there, with only the computer Gerty (voiced by Kevin Spacey) keeping him company. Now, just as he's preparing for a return home to his wife and daughter on Earth, Bell begins to fall apart, physically and emotionally.

Jones spoke exclusively to SCI FI Wire in Los Angeles. The following is an edited version of our interview. Moon opens in limited release on June 12. (Possible BIG spoilers ahead!)

One of the things that I liked most about Moon is that it shares stylistic company with movies like 2001: A Space Odyssey, Gattaca and Contact, movies that have a sort of "science-fact" basis. Was that sort of a mandate when you were conceiving this?

Jones: Hard science, yeah. I'm seriously into my sci-fi, so for me I wouldn't feel comfortable trying to do a soft sci-fi film. I don't feel any great deal of connection to that kind of material. We put Moon together based on some personal stories and ideas, but also on the work of a scientist, a guy called Robert Zubrin, who wrote a book called Entering Space, which was about colonizing the solar system and doing it in a fiscally viable way.

One of the early chapters in that was going to the moon, mining Helium-3 and using it as a natural resource and as a raw material and fuel for fusion power. So all of that is kind of scientific backing of the story, which is quite a lot; that really justifies setting up the base, what the base does, what Sam's job is. [BIG spoiler ahead: Skip to the next question if you don't want to see it.]

So it does a lot of the work there, and then on the cloning side, to be honest, the real stretching of the truth element is not so much the science but what the company decides to do with the science. That's where you're kind of stretching credibility.

Where do you make the decision as a filmmaker to fictionalize certain elements simply because that will make for a better story? For example, inside the moon base, there's normal gravity.

Jones: That was an early call. We very briefly played around with the idea of "Right—how are we going to do one-sixth gravity? Do we use wire work?" On an independent film budget, it's just impossible. There's no way we were going to be able to do it, not to mention there's no way to hide the wire rigs if you want to have a claustrophobic shape of the base that we had built. That just wasn't going to work, and it wasn't appropriate for an indie film, so we made some compromises. But we screened the film at the NASA Space Center, and none of the NASA employees or astronaut Tom Jones had any problems, so obviously if it passed their test, we kind of felt comfortable that people would just kind of accept that. ... 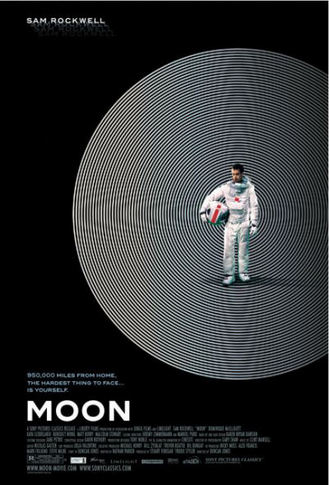 Many of the movies that this film shares company with, such as 2001, have a great wealth of reference material you can drawn on for technical information, much less artistic inspiration. Did you look at the making of those films at all for any guidance?

Jones: Not really, not those science fiction films. Dead Ringers was important to us, because of the work we do with Sam and having him play multiple parts. Dead Ringers and [director David] Cronenberg, there was a Criterion version of that DVD that was very important to us, because there was a whole making-of section on that, and it's actually so good that it's actually got raw rushes from the shoot on there.

So we were really studying that as a starting point for what we wanted to do. And then I had the chance to talk to Spike Jonze, who'd done Adaptation, where they had Nicolas Cage playing multiple parts. That was really useful, and he gave me some great advice as well. Those were the two films that really informed on the technical side.

On the aesthetic side, absolutely—I mean, Outland in particular was a big one for me. The habitation zone in Alien of the Nostromo, that was another huge one. Those were basically the two main ones, sort of the work of guys like Ron Cobb and Douglas Trumbull and Peter Hyams. There was a group of people that we were very much referencing and looking at as well for the look of things, myself and my concept artist, Gavin Rothery.