Fables creator sounds off on Once Upon a Time's 'similarities'

Tag: fables
Tag: Once Upon A Time

Ever since ABC's Once Upon a Time premiered earlier this fall, sharp-eyed viewers have notice that it bears a rather striking resemblance to the long-running, fairy-tale-centric Vertigo comic Fables, which was optioned by ABC a few years back. Now, Fables' creator Bill Willingham gives us his take on how the two relate.

Willingham wrote something of an essay over the weekend in which he interviewed himself about his comic and Adam Horowitz and Ed Kitsis' hit show. You should head over to Comic Book Resources to read the entire piece—it's a pretty well-reasoned take on idea generation and how, in Hollywood, not everything is as malicious as it might seem—but here are some of the highlights:

"Our fantastic literature is rife with 'they've been hiding amongst us all along' scenarios. There were plenty of such tales long before Fables came along. There will be scads of them long after Once has aired its final episode and Fables shipped its final issue. If you start with the notion of fairy tale characters still alive in the modern world, the next step of placing them in a secret community seems almost axiomatic." 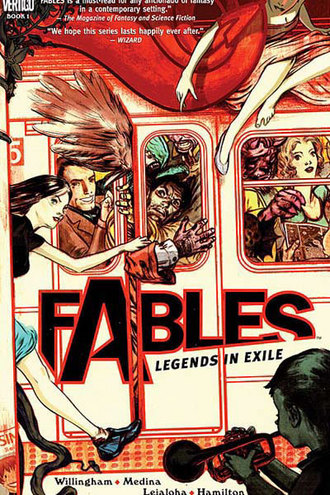 On the fact that ABC had previously developed Fables as a TV series:

"Yes, but that by itself doesn't prove anything. First of all, I am and always was on the outside of any deals between DC/Warner and any studio regarding a Fables adaptation. DC didn't want me as part of the deal making and paid handsomely not to have me directly involved. So it was their baby all along. As such, I was never privy to the details of that supposed deal with ABC. I heard the same rumors you did, that the writers of that project weren't supposed to have made the big announcement when they did. In any case, the ABC Fables project went no further than creating an unproduced pilot script. I eventually got to read that pilot, and it was a far cry from anything to do with Fables."

On whether Horowitz and Kitsis ever read Fables—and the fact that one of them denied ever reading it while the other came clean:

"I have no trouble imagining the harried creators of Once, tired of being badgered from the audience every time they talk about their series, finally taking a look at the Fables comics they were accused of stealing, and realizing, 'Oh yeah, one of us did see some of these books before,' among the many stories that slowly helped build the idea for Once in their minds.

"That's the nature of the beast. Storytellers get much of their ideas and inspiration from other stories. If handled in a non-sinister manner, those stories are not immediately copied, in whole or in part, but instead sent down into the mind's basement kitchen, to stew and simmer, along with all of the other stuff already down there, filtering out the good from the bad, the better from the good, adding in a dose of 'yes, but I would have done it differently,' until something new and original, and absolutely not a rip off, rises out of the cauldron, ready to become one's own stories. It's this same process that makes it so easy to forget where all the individual bits came from."

Well, if Willingham, one of the few people to gain or lose if there were any shenanigans afoot, is satisfied, then case closed, right?

Tag: fables
Tag: Once Upon A Time