The long wait is over. The decisions have been made. The scheduling has been done. Now all we have to do is watch our favorite sci-fi television shows next season and fall in love with some new ones. Suddenly, it really is all about us.

For now, it's time to assess which shows will be winners and which will be losers.

While the five broadcast television networks did us plenty of favors by picking up beloved shows such as Dollhouse and Chuck, not every scheduling move is going to give our favorite shows their best chance of survival. Every show that got a pickup, both the new and the renewed, is without a doubt a winner. But most any show can die a tragic death if it suffers from bad scheduling.

Here's a breakdown of the network strategy when it comes to sci-fi and fantasy television, as well as how things stack up for each show.

You have to give ABC credit. Last year it put together some of the most creative shows on television (Eli Stone, Pushing Daisies) and took huge chances, which didn't really pay off. Programmers must not have learned their lesson, because they have the riskiest sci-fi and fantasy schedule of all the networks, with Flash Forward, Eastwick and V. They're also kicking off a night of comedy and desperately trying to get some new shows to take off, especially considering that their aging hits—Lost, Desperate Housewives and Grey's Anatomy—won't be around forever. After all, it can't all be about Dancing With the Stars.

Flash Forward: ABC's most buzzworthy show has landed in Ugly Betty's spot on Thursday nights at 8 p.m. ET/PT, before Grey's Anatomy. That puts it up against CBS' Survivor, Fox's Bones and The CW's The Vampire Diaries. It's a tough night to get traction, but Flash Forward will at least get sampled there. We're calling Flash Forward a DRAW.

Eastwick: This witchy brew of devilish comedy managed to get the best spot on the schedule: Wednesdays at 10 p.m. With only a mature CSI: NY on CBS and the new Jay Leno Show on NBC, the competition leaves the door wide open, whether ABC's night of sitcoms helps it out or not. We're calling Eastwick a WINNER.

Lost: After five seasons, one of the most creative and captivating shows on television is headed into its final season with just 17 episodes left to go. ABC hasn't laid out its midseason schedule, so we can't be sure where it will land, but Losties aren't about to stop watching now. We're calling Lost a WINNER.

V: Plans are that V will have four seasons, with a beginning, middle and end. Since it's set for midseason, it's too early to tell what ABC will do with it. The clips look nice and creepy, but will it be too sci-fi for general audiences? We're saying the jury's out. 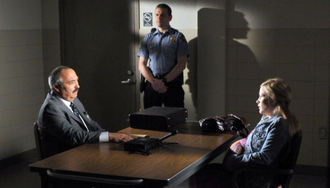 The network knows its audience, and that audience usually favors the work of producer Jerry Bruckheimer. What CBS' audience doesn't appear to want is any new original sci-fi or fantasy programming. We should consider ourselves lucky that it was cost-effective for the network to grab up Medium when it had the chance.

Ghost Whisperer: Who'd have thought four years ago that this little supernatural series—about a young woman who acts as a social worker for the dead—would end up being the go-to show for CBS on Friday nights? While nearly every other show has fallen in ratings, Ghost Whisperer has stayed strong. Beyond that, it had a good season creatively. Next season, Ghost takes on The CW's Smallville and NBC's Law & Order, neither of which should have much of an effect on it, since they have different audiences. So we're calling Ghost Whisperer a WINNER.

Medium: With NBC's Jay Leno Show taking up five spots on the schedule, the decision whether Medium would get a pickup came down to the last minute. The buzz was that NBC wanted to order 13 episodes but star Patricia Arquette had 22-episode seasons specified in her contract. True? Maybe. In any case, what's certainly true is that CBS is very happy to get hold of Medium, since the show is produced by CBS TV Studios, which means the studio will get more of the profits than it would have if the show had remained on NBC. Regardless of the circumstance, this should be a very good move for this psychic-mommy detective series. It will get a full season of episodes and—finally—a true home on the schedule with Ghost Whisperer, driving some compatible viewers its way. Beyond that, it looks to be a winner for CBS as well, with the series offering a nice solid bridge to both Ghost and Numb3rs. We're calling Medium a WINNER. 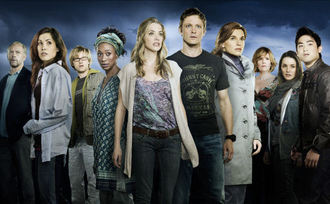 This season it's all about Jay Leno for NBC. Of all the networks, NBC is in the biggest trouble. It doesn't have ratings winners such as American Idol, Dancing With the Stars or CSI. Only Sunday Night Football really brings in the viewers. So NBC is hoping The Jay Leno Show can draw some ratings by airing five nights a week. That offers NBC the ability to schedule original programming year-round with its experiment in "timeslot sharing" for several shows. Heroes and Chuck will share Chuck's Monday timeslot, and each show will get fewer episodes. But hungry ABC and CBS are thinking they just might try to take advantage of NBC's lack of scripted programming at 10 p.m.

Chuck: OK, Chuck people, you can finally breathe. Yes, you'll get a third season, if only 13 episodes. So it's a WINNER for merely being picked up. The bad news is you'll have to wait until midseason, while Heroes finishes its fall run. The other bad news is that Chuck could really use a new timeslot. Mondays opposite Fox's House and ABC's Dancing With the Stars has been tough on our favorite geeky spy. So we're calling Chuck a DRAW.

Day One: In another timeslot time share, Day One is set to follow Chuck on Mondays at midseason. NBC is calling Day One a series "event," which means it's planning only one season. The series chronicles the journey of a group of survivors after a global catastrophe, which so sounds like the perfect companion for Chuck—NOT. NBC's medical drama Trauma, meanwhile, gets the timeslot in the fall, and if that show is a big hit, Day One may find itself on another night. It's too early to tell whether Day One has potential and whether viewers will be more interested than they were in Jericho. We're saying the jury's out.

Heroes: Thanks to an early announcement by NBC, we knew we had another season of Heroes in our future. Then came the bad news. Not only will Heroes timeslot-share with Chuck, it will also be in Chuck's old timeslot against Fox's House and ABC's Dancing With the Stars. We hate to say it, but we think Mondays at 8 p.m. is going to be kryptonite for these superheroes, so we're calling this former hit, Heroes, a LOSER. 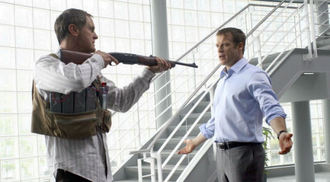 When you've got a megahit such as American Idol (called "The Death Star" by many in the industry), you can afford to take some chances. And take some chances it has with its sci-fi and genre programming, by bringing in a couple of interesting choices for midseason. There's the graphic-novel-inspired Human Target and the reincarnation drama Past Life. But the biggest, boldest moves involve keeping Dollhouse and moving Fringe to Thursdays.

Dollhouse: Picking up Joss Whedon's Dollhouse, with its bargain-basement ratings, was a big shocker for everyone. Remember this moment, boys and girls. It's the point where DVR ratings and Internet downloads became a major factor in television programming. Like Chuck, the mere fact that Dollhouse lives makes it a WINNER. While Dollhouse won't be overwhelmed by its competition—ABC's Ugly Betty and CBS' Medium—the bigger problem is that the series hasn't been able to build its audience. And its comedy lead-ins—Brothers and 'Til Death—don't look like they will be of much help. Unfortunately, we're calling Dollhouse a LOSER.

Fringe: You can't blame Fox for trying to take advantage of the drop in audience that both CBS' CSI and ABC's Grey's Anatomy have suffered this year. Whether Fringe can prevail over them: That's the big question. We like the Bones/Fringe pairing, even though a Fringe without an enormous lead-in such as last season's House or American Idol is a scary thought. While it's likely Fringe and The CW's Supernatural will draw similar audiences, it's also likely viewers will find a way to watch both shows. But this one's going to be tricky, so we're calling Fringe a DRAW.

Human Target: Fox knows how to take care of a new show. Just put it on after American Idol. Both its midseason shows will see a little network love in their programming. Human Target stars Fringe's Mark Valley as a man who protects people by pretending to be them. Not only will Fox give Human Target the plum spot on Wednesdays after the American Idol results show, it's also launching the series between the NFC Divisional Playoff Game and the premiere of 24 on Jan. 17. With no significant problematic competition, we're calling Human Target a big WINNER.

Past Life: This one's about a team that investigates past lives to solve problems in present lives. Fox is calling it a "fast-paced thriller" where a mystery "needs to be solved in both the past and the present." Ohhhkayy. Whether or not the idea for the series sounds preposterous, Fox is behind it 100 percent. It's got the best slot on television, after Tuesday's American Idol performance show. We're calling Past Life a DRAW. Sorry. The timeslot is a WINNER, but the series is a "fast-paced thriller" about reincarnation. Although the show's clips do remind us a little bit of Ghost Whisperer.

The littlest broadcast network is wisely sticking to teen and young-adult soap operas when it comes to its new shows, and The Vampire Diaries fits right in. Its pairing with Supernatural is promising, and Friday's move for Smallville shouldn't hurt the show or the network.

Smallville: It may not seem fair to viewers that Smallville is getting kicked to Fridays as it goes into its last season. But do you really think the people who watch ABC's Supernanny, CBS' Ghost Whisperer or NBC's Law & Order are watching Smallville? It's doubtful too many regular viewers will be thrown off by the move, and the Smallville producers are getting a chance to finish the series the way they want to: with a final ninth season. In our eyes, that makes Smallville a WINNER, regardless of what the final season's ratings are.

The Vampire Diaries: Thanks to the obsession with Twilight, the angst-filled-teen-girl-meets-brooding-vampire-boy genre should have no trouble drawing in the chickettes. Picking up this series was one of the best moves The CW has made in years. If it turns out actually to be a good show, too, all the better, but that's not a deal-breaker. Yes, it's up against ABC's Flash Forward and Fox's Bones, but we're calling The Vampire Diaries a WINNER.