You know Colin Cunningham even if you don't know his name, because you've seen him on a ton of sci-fi TV series like Stargate SG-1, The 4400, Smallville and The X-Files. But after the first season of Steven Spielberg's alien invasion series, Falling Skies, you'll remember Cunningham's name. Because his colorful character, John Pope, is unforgettable.

"That just goes to the cool storytelling they're doing on the show. You've got a real jerk-off [with John Pope], and yet he's kind of fun to watch," said Cunningham in an exclusive interview.

"What's also really nice about this show is that the aliens are not blond-haired, blue-eyed, big-boobed Baywatch women. You know what I mean? They look very alien. They're not androids, you know? And with two-piece bathing suits. They're seriously ugly, creepy, terrifying things that will kill you if they see you, period," he said.

Last Sunday in the Falling Skies premiere we got an introduction to bad guy John Pope when he took Noah Wyle's character, Tom Mason, and his rebels captive in hopes of extorting weapons and supplies from the 2nd Massachusetts, a large group of fighters and civilians. And while things might not have gone exactly as planned for Pope, his journey this season will stretch the character in fascinating ways as the season continues.

"John is most certainly a bit of a wild card. He's a renegade. I think he was certainly a bit of a biker and a ruffian, bit of an outlaw before the alien invasion. But now you've got 98 percent of humanity that's been wiped out, and the 2 percent of humanity that's left is starting to crawl out of the rubble and organize. Well, fortunately or unfortunately, humanity or whatever 2 percent is left, there's good people and there's bad people. And I think John Pope was one of the bad ones," said Cunningham.

While Pope may be a bad guy, he's also highly intelligent. "He's a really, really smart guy. So I kind of see him [before the invasion] as a guy who'd be riding his motorcycle to the strip bar on a Saturday night, but on Sunday he's at the library reading Herman Melville novels, you know?" he said.

"He's so complex, and he's not Mr. Goody-Two-Shoes. He's very much a realist. I see John Pope as an incredible pessimist or a fatalist. I think where his sense of humor comes from is that he honestly does not believe at all that any of this will turn out to be good. They're all going to die. I think that's the way John sees it. This is an unwinnable war," he said.

Despite that, while much of the rest of the human race has just been trying to survive, Pope has been studying his enemy and figuring out ways to kill the spider-like aliens.

"I think he's come so close to death so many times with these things that now he seeks them out, because it's almost like, 'I'm not going to sit around and wait to die. I'll hunt you. And then at least I'll go down guns a-blazing. But I won't sit and cower and wait to be taken out,' which is what I think he believes is going to happen anyway," added Cunningham. 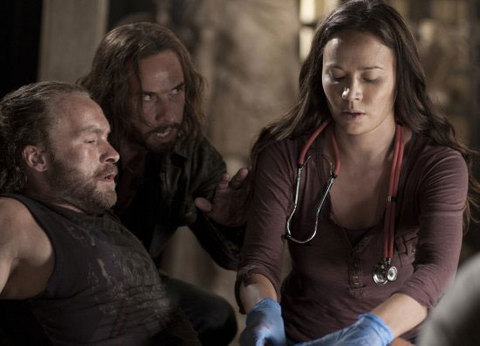 While hero Tom Mason and villain John Pope fall on opposite sides of the good-bad spectrum, they have one thing in common. Pope's vicious gang of "dumbos" are not his mental equal, said Cunningham. "There's the line in one of the episodes that's like, 'The last book that those guys read had a dog named Spot in it.' So I think there really is an intellectual connection certainly between John and Tom Mason."

Beyond that, we'll discover that John Pope has a particular talent that comes into play for the 2nd Mass. "This guy is, again, he's not your normal bad guy. ... I'll just say that I think John Pope is very good with ingredients, putting them together for a particular outcome," said Cunningham with a laugh.

While Pope's intelligence and special talent might not help him win over the good guys on the show, his humor certainly will hit home with audiences with lines like "Being the leader of a post-apocalyptic gang of outlaws has been exhausting," and "You call yourself the resistance, right? So resist!"

For the talented character actor—whose long list of credits includes a directing gig for the film Centrigrade, which made the Academy Award short list in 2009—he's best known to sci-fi audiences as Maj. Paul Davis on Stargate SG-1. However, Cunningham is thrilled to have a strong new role to sink his teeth into.

"I guess Stargate introduced me to the sci-fi community of fans. It was really quite the blessing, because I've been all over the world. I've done some conventions. And if anything, what I'm really happy about with Falling Skies is that I think we can put Major Davis of Stargate SG-1 to rest for a little while and I can become John Pope for a bit," he said.

Here's a preview of this Sunday's episode, "Prisoner of War":

So what do you think of John Pope so far?