Felicia Day and The Guild PWN at the Streamy Awards

Day herself won for best female actor in a comedy Web series for the second year in a row. As the creator and writer of the series, winning acting awards was her plan all along. "It means quite a lot, because I created this role for myself because I didn't see that role out there and I didn't see myself getting that role even if it was out there in Hollywood," Day said. "That's just the way I am. I'm a little quirky. This is for geek girls everywhere. I hope I continue to make content in the future and act in roles in the future that inspire people to go on and create themselves."

In defense of Kinga Forrester: The evil ladies of MST3K
Felicia Day hilariously owns this dude who attacked her for getting a haircut

The Guild director Sean Becker won for best directing for a comedy Web series, his first Streamy. The show won awards last year for best comedy Web series. Becker was especially proud to win for directing because he's seen the competition get even tougher.

"We had the first Streamys last year and the Streamys this year, and I feel that the competition has gotten so much more intense this year," Becker said. "One good thing about the Guild is that they had come in early, so we kind of got to build a following. Now we're at that level where I believe it's just completely equal ground. To be even nominated, I know that's the cliché to say, but there are a lot of Web shows out there, so to be able to still be acknowledged is just great." 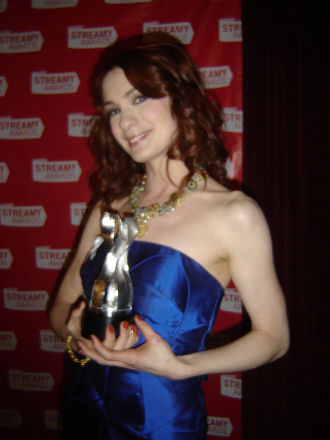 The other genre-related winner was the best animated Web series, How It Should Have Ended. The series rewrites endings to popular movies such as Avatar and 2012. Web site founders Daniel Baxter and Tina Alexander make fun of A-list filmmakers, but they remain humble.

"I'm still kind of shaky," Baxter said. "It was like walking past all these people I really respect and follow a lot of their content; I'm getting a trophy in front of all these people. It's a big honor."

Alexander added, "We're shocked. Honestly, the nominees alongside of us, we really respect a lot. We watched Homestar Runner forever. I can't believe [it]. They're awesome, so we're really honored. A lot of talented people here."