Filmmakers: Orphan isn't what you think it is

For even casual horror fans, "evil kid" movies are nothing new: from The Bad Seed to The Omen to The Good Son, there's a clearly established canon of films in which children are malevolent beings who must be killed rather than cuddled.

David Leslie Johnson, screenwriter of the newest example of the genre, Orphan, said that it was the subgenre's rich legacy, and its familiar formulas, that afforded him such great opportunities.

"That was one of the things, actually, I think worked for a positive in writing this," Johnson said in a group interview Saturday in Los Angeles. "Because there is sort of a formula for this kind of movie, you can sort of pretend to be going along with it, and I was consciously trying to, like, hit the points that would be leading you into a place of thinking you know where this movie is going, and then take a sharp turn and deviate from that. So the formula creates the expectation so that you're then able to get away with the surprise."

Orphan follows a husband and wife, played by Peter Sarsgaard and Vera Farmiga, who decide to adopt a child after the wife has a miscarriage. They find a unique little girl named Esther (Isabelle Fuhrman), who turns out to be not quite—or perhaps much more than—what she seems. Director Jaume Collet-Serra said that the film's themes echoed his artistic goals, the first of which was making a movie that subverted expectations and that deviated from his previous genre effort, House of Wax.

"That's what I wanted to do," Collet-Serra said. "I didn't want to do another House of Wax. I think it was good for what it was, but everybody knew it was a slasher movie where it has a formula: you know, five young kids, they somehow need to separate, and the dying, you don't question it. They all die at some point, but you're just questioning how they're going to die. Here, you don't know what's going to happen; there's this evil girl who is going to be in this house with the family, but you don't know who's going to die, when or what's going to happen."

Collet-Serra added that he hopes the film's secrets remain that way for people who haven't seen the movie yet, but which provide a good selling point to the friends of those who do see it. "What would be ideal is for the people that see the movie to say, 'You think this is what this movie is going to be like, but it's not,'" he said. "Because, right now, with the poster and the trailer and everything, a lot of people are feeling like they've already seen it, seen that kind of a movie. But I don't think that's true. So hopefully the movie will have an opportunity to grow with word of mouth and things like that." 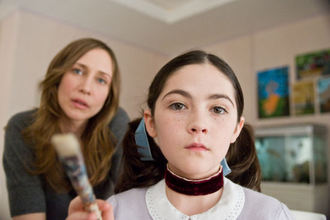 Much of the suspense in "evil kid" movies comes with the child's ability to dupe or outwit his or her adult counterparts. So are the adults in Orphan stupid? "The idea was really not so much that they're stupid but that Esther is that much smarter," he argued. "One of the things that you can sort of fall into with the evil child is that 'How are all of these adults being outsmarted by this child?' I wanted to go into it thinking, 'Well, she's just really that smart; like she's Hannibal Lecter smart. She walks into a room and she sizes everybody up, and she figures out, "OK, I know what your weakness is, and I don't want anybody looking at me. I want you looking at her, and being mad at each other so that I can do what I want to do."'"

Johnson also suggested that subverting expectations is essential to the genre itself. "I think the idea of children being scary has always been there," he said. "Not so much because there's something primal about the need to protect children, and when you turn that on its head and you make the child the bad guy, it's violating everything that you feel. There's another aspect of it, and I don't know whether this is real or not, but on some level I wonder [if] kids are also reminders of our mortality in a way."

Johnson added: "Ultimately, you know, your child kind of looks like you, kind of grows up and acts like you, and ultimately is here to replace you. So I don't know if that's maybe one of the reasons that kids persist as a horror subgenre."