Finally! Warehouse 13 comes back in July

Yay! It's about time: Syfy announced that its hit series Warehouse 13 has begun production on season two, which will premiere on July 13.

All the main cast members are back, along with special guest star Nolan Funk (Nickelodeon's Spectacular and Drake & Josh), who will appear in a four-episode arc.

Home is where the haunt is in 'SurrealEstate': How to watch SYFY's new scripted series
SYFY's zombie thriller Day of the Dead gets first George A. Romero-inspired trailer at San Diego Comic-Con@Home

Season two will consist of 13 brand-spanking-new episodes. Below is the official announcement. 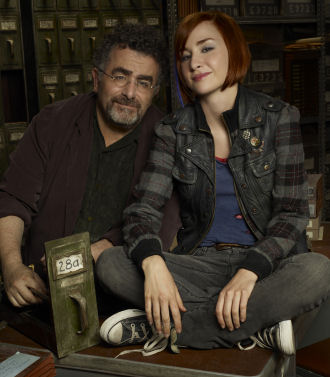 New York, NY - March 2, 2010 - Syfy's #1 original hit series, Warehouse 13, commences production on season two this March in Toronto and will kick off the new season with a summer premiere on Tuesday, July 13. Series regulars, Eddie McClintock, Joanne Kelly, Saul Rubinek and Allison Scagliotti, along with series guest star, CCH Pounder, reprise their roles in the series ratings leader for Syfy. The 13 episode, hour-long dramedy is slated to return this summer 2010.

Nickelodeon star, Nolan Gerard Funk (Spectacular), who recently starred on Broadway in Bye, Bye, Birdie, guest stars in a four-episode storyline in season two. Funk portrays Todd, a tech savvy local who takes a special romantic interest in Claudia (Scagliotti). This budding relationship is put to the test by the secrets they are forced to keep from one another.

Warehouse 13 follows two Secret Service agents who find themselves abruptly transferred to a massive, top-secret storage facility in windswept South Dakota which houses every strange artifact, mysterious relic, fantastical object and supernatural souvenir ever collected by the U.S. government. The Warehouse's caretaker Artie (Saul Rubinek) charges Pete (Eddie McClintock) and Myka (Joanne Kelly) with chasing down reports of supernatural and paranormal activity in search of new objects to cache at the Warehouse, as well as helping him to control the Warehouse itself.

Warehouse 13 is produced for Syfy by Universal Cable Productions. Jack Kenny (The Book of Daniel), returns as showrunner.