The man who revived Doctor Who, Russell T Davies, has been hard at work on his latest BBC series, Wizards vs. Aliens—and we finally have some new details on the quirky kids' series.

The first official pic shows actors Scott Haran and Percelle Ascott as characters Benny Sherwood and Tom Clarke, and they appear to be hiding behind a shed. From an alien and/or wizard perhaps? I guess we'll have to wait a while to find out.

Christopher Eccleston says Doctor Who relationship 'broke down' with showrunner
Russell T. Davies on why he won't return to write for Doctor Who 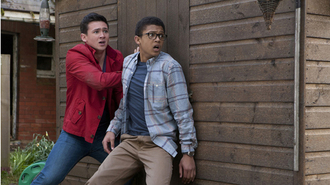 The official plot synopsis has also been released, shedding some light on exactly what we can expect:

Tom Clarke is a seemingly ordinary boy who loves football. He lives with his dad Michael and grandmother Ursula in an ordinary house in an ordinary street - but there's something different about Tom. He has an astonishing secret - his family are Wizards! When the alien Nekross arrive on Earth hungry for magic, there's big, big trouble in store for all wizardkind.
With the help of his friend and science super-brain Benny, Tom must stop them - but will these two unlikely heroes succeed, or will the Nekross devour all the magic on Earth with disastrous results for the whole planet?

Sounds ridiculously fun, and knowing Davies, he can surely pull off the out-there premise.

What do you think? Are you looking forward to Davies' latest series?