The Evil Dead remake has some Paul-Bunyan-sized shoes to fill. Not only can the original film boast being in the top 5 of almost every "most influential horror films of all time" list, but it does so with very little budget. In light of that, it's nice to see the remake isn't scared to make some bold promises with its very first teaser poster.

There have been many pretenders to the Evil Dead throne, but none have truly succeeded. Even Raimi's own successive sequels never attempted to scare audiences, just make them jump and, more importantly, laugh. The remake, however, is making the gamble in the hopes it will achieve true horror greatness. The trailer showed us the gore, the poster brings us a promise. 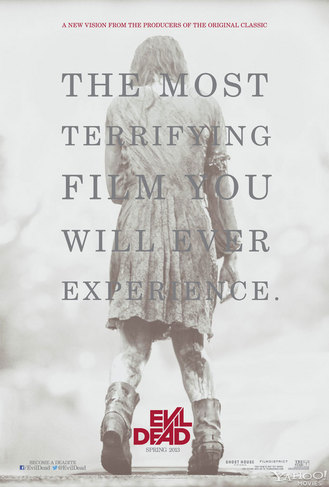 Those are big words, especially considering how many contenders there are for the title of "most terrifying." The question is, will they make good?