First image of Seth Rogen as The Green Hornet!

First a bomb scare, now this: The first image of Seth Rogen and Jay Chou in full costume as The Green Hornet and Kato, courtesy of SplashNews; click for a larger version after the jump.

Now we know there's a lot of animosity toward Rogen for taking on this franchise, but honestly: He does kinda look like the character, right? (Go to SplashNews for the full image.)

Rogen plays Britt Reid, the newspaper entrepreneur by day and masked superhero by night. Jay Chou takes over the role of chauffeur/martial-arts expert Kato, Cameron Diaz is Lenore Case, and Inglourious Basterds' Christoph Waltz plays the villain, Chudnofsky. Rogen has described the script, which he wrote with partner Evan Goldberg, as the story of a hero and his sidekick. Michel Gondry directs. Green Hornet opens Dec. 17, 2010. 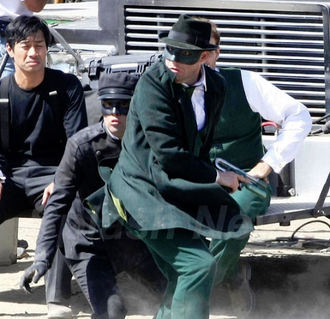