Mark Millar, the guy who wrote Kick-Ass, has also written a book about the creation of his satirical superhero comic and its upcoming movie adaptation, and we've got an exclusive bit of new art from it: a storyboard for a key scene, which you can view at the bottom of the story.

The book, Kick-Ass: Creating the Comic, Making the Movie, comes from Titan Books and hits stands on Feb. 23. The official announcement is below.

The movie hits screens on April 2. 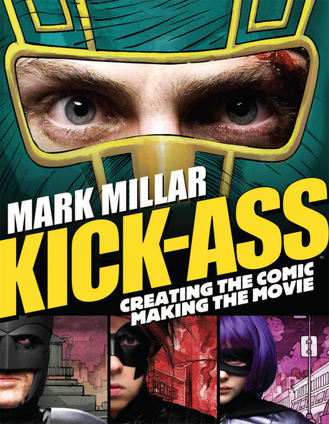 A Page-To-Screen Companion By Mark Millar!

Written by Mark Millar, with input from the whole cast and crew as well as the comic's artist, John Romita Jr., this companion is the full and official page-to-screen story of Kick-Ass, straight from the creator himself. With eye-popping art from the original comics, script extracts and hundreds of movie photos, this slick companion is the indispensable guide to every ass-kicking aspect.

What would happen if you tried to be a superhero? What would happen if an ordinary kid in a spandex costume came face-to-face with the criminal underworld? Dave Lizewski is just a regular teenager, with a MySpace page, a comic book collection, and no girlfriend; but as self-styled vigilante Kick-Ass, he's about to find out exactly how a superhero would fare in the real world... and it's going to get really, really violent!