FlashForward's future isn't what you thought it would be

The characters on ABC's FlashForward are getting increasingly tense as the big blackout date (the date almost everyone on the planet saw in a future vision when they blacked out for 2 minutes and 17 seconds) approaches. That date, April 29, just happens to be a Thursday, the same day that the series airs. It all seemed like karma to the producers ... until they realized that the show's April 29 vision date wouldn't quite be able to match up to the real April 29.

"It would have been cool," said executive producer Jessika Borsiczky. "It wasn't a trick we originally designed. ... Once you're in the reality of the story and you're caught up in it, I don't think it matters. I think it was just cool. It would have been a fun way to promote the show."

But between the Olympics and American Idol, Borsiczky believes the right decision was made to postpone the start of the second half of the season, and that meant that FlashForward's April 29 wasn't going to happen on the real April 29.

"I think the audience will follow the timeline within the show, that it won't throw anybody off, that the reality of the show is slightly staggered from the date and time in life. I think it won't be confusing at all. It will be really straightforward," said Borsiczky. 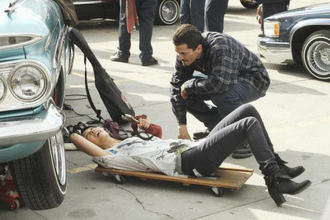 In fact, with original consecutive episodes running straight through to the end of the season, Borsiczky promises plenty of excitement ahead for the characters, including what happens on that vision date.

"There is a lot of movement emotionally for everybody as they get closer to this day," she said. "Everybody knows what they've seen. They're all fairly certain that fate is making these things happen, although there is some evidence that free will can intervene. None of them are sure what actions of theirs are free will versus what actions of theirs are fate, so they are struggling to use their free will as much as they can, and it's real emotional watching that happen as we get further into the drama and closer to April 29."

Borsczky added: "Things seem to be happening, but not with a 100 percent regularity. So I think there's still a great question mark. Do you want to change your future? And can you change your future? Now I think we've really gotten over the hump of the setup, and now we can really watch these characters kind of either battle or embrace fate, fate versus free will. That's the really the theme of the episodes to come."

As for the characters, we'll find out more about Simon (Dominic Monaghan), and Mark (Joseph Fiennes) and Olivia's (Sonya Walger) story will come to the forefront. We're also "huddling closer to the day of Demetri's murder, so that's something obvious we're going to catch up to and see and answer," she said. "I hope the audience is really rooting for him to survive," she added with a laugh. "I love how he's dealing with this question. He's really, I think, handling it in a way that feels real."

Just maybe Dyson Frost (Michael Massee), who popped up with a 1991 message to Demitri (John Cho) last week, will have a clue for his survival? We'll have to see. But Borsiczky promises, "I think definitely every episode from now on has big answers to questions."