FlashForward's future is murky: What will save it?

We're trying to look ahead to April 29, 2010—the date ABC's FlashForward ends its first season—but unlike the characters on the high-concept sci-fi series, we're not sure what the future holds.

We dig the show, and it has a fair share of fan sites, not to mention heated debate on ABC's own Web forum. But the show, which debuted to great ratings, has seen its audience continue to drop, and at least some fans seem to be losing patience with the complex show's sometimes meandering storylines.

Some blamed the World Series for low ratings on Oct. 29, but the show still lost viewers last Wednesday, with no baseball competition. TVbythenumbers.com's Bill Gorman says, "If it doesn't recover from the 2.6 rating, its future on next season's schedule is in doubt. And if the ratings go lower than that, it's got no future at all."

It might not be as dire as Gorman suggests. ABC, showing confidence in the series, placed an order for a full season of episodes as of Oct. 12, enough to run through April 29 of next year. But if the first 13 episodes manage to lose more viewers, there's nothing stopping ABC from pulling the plug at any point on the final nine. Still, even at its lowest rating, FlashForward remains the number-two network show in its timeslot.

A complicating factor, of course, is the show's Thursday-night competition: CBS' Survivor dominates at 8 o'clock. Fans always like to think that a new night would give the show the chance to find new viewers, but it's not like people can't watch FlashForward if they really want to, and ABC has done a massive advertising campaign for the show, so it's no secret that it's on. 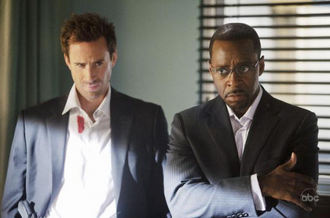 The good news is that DVR numbers add another 1.9 million viewers to even the lowest-rated episodes, according to Radio Business Report/Television Business Report. During World Series week, FlashForward actually grew its female audience.

It's not a good sign that ABC has been giving up on genre shows lately. The quiet non-renewal of Eastwick didn't seem to break any hearts, but the lackluster summer airing of Defying Gravity didn't seem like a fair test of that show's appeal. The network's latest sci-fi offering, V, meanwhile, started out strong but suffered a sharp drop in its second week. The trend could give them cold feet, especially as ABC loses its genre mainstay, Lost, after its final season in 2010.

Another indicator of trouble is the big change behind the scenes: executive producer Marc Guggenheim left FlashForward last month. Ain't It Cool News speculates that Guggenheim was let go because of network dissatisfaction with his work on the episodes after the premiere.

But we took the news as a good sign: Whatever the reason Guggenheim left, we're confident that the show will thrive under the sole leadership of co-creator David Goyer. And ABC seems to be sticking with the show, at least for now.

Is there something that can be done creatively to keep viewers tuned in?

AOL Television critic Gary Susman has several suggestions for ensuring FlashForward's creative health, including maintaining a sharp focus on character and moving the plot along faster. Susman also calls for a more accurate portrayal of the world's dealing with the massive blackout event and actually investigating the bigger philosophical mythology rather than the nuts and bolts of a one-time conspiracy. Those sound like good ideas. What do you think?