When Purge series creator James DeMonaco first approached director Everardo Gout about taking on the fifth film in the franchise, The Forever Purge, Gout thought it was a mistake — or maybe a weird joke.

Having worked primarily in television directing for shows such as Luke Cage, The Terror, and Snowpiercer, a blockbuster horror franchise knocking at his door came as an understandable surprise. “Then I started reading [the treatment],” Gout tells SYFY “And I was like ‘Oh, I get it.’ He’s really pushing the envelope here, he’s really going for a deeper version of his universe.”

**SPOILER WARNING: This story contains spoilers for The Forever Purge.**

In DeMonaco’s Purge universe — which includes four other films and a short-lived TV series — the United States takes part in a yearly ritual in which all crime, including murder, is made legal for 12 hours. It’s a concept that’s made for some timely conversations over the past eight years about U.S. politics, racial relations, economic inequality, and the threads connecting them, all through the lens of an oft-shamelessly violent series of horror flicks.

The Forever Purge, once promised to be the final film in the franchise, takes these aforementioned elements and adds immigration politics as the cherry on top. For all the political machinations of the previous films in the series — the fourth film in the franchise, The First Purge (2018), introduced viewers to the Purge’s origin as an anti-Black racial experiment and The Purge: Election Year’s 2016 release speaks for itself — The Forever Purge leans in even harder. The film follows recent Mexican immigrants Adela (Ana de la Reguera) and Juan (Tenoch Huerta) as they settle in southern Texas just as the U.S. has once again legalized the Purge for the first time in eight years. The pair survive Purge Night, only for some people to ignore the 12-hour time limit and continue purging to their heart's content while sporting an anti-immigrant agenda. All across the U.S., this growing hate group begins taking over large cities in an attempt to “purify” the country.

“Sometimes you enter a project and you don’t know if you’re ahead of the curve or behind the curve and very rarely are you at the curve. It’s a movie for our times,” Gout explains. “It’s a movie that could almost be a documentary in some aspects... if you think about it.”

At the time, The Forever Purge was thought to be the final entry in the series, so Gout wanted to go out with a bang. “[DeMonaco] told me that he felt that with time... and the TV show, [the Purge franchise] got a little bit Hollywood washed,” Gout explains. “He wanted to go back to its original intent. The Purge is a big political challenge to the second amendment. He is absolutely anti-guns, and that’s how this whole thing started. And so I was encouraged and empowered to take that to the next level and I brought in my viscerality and my authenticity.”

That authenticity translated to an immigrant story that Gout helped develop by bringing in a Mexican cast and “the best actor in Mexico, which to me is Tenoch Huerta. I’ve worked with him before, I trust him completely, and I wanted to bring him onboard, with his thick accent and everything.

“You know, it’s part of the truth of who we are and will just make [character interactions] into something funny in the script instead of trying to shy away from it,” he continues. “We shine a lantern on it and we make a joke out of it and it’s part of the tension between him and Dylan [Tucker, played by Josh Lucas] and they can’t understand each other because of the accent and all these layers.”

Adela and Juan have different expectations for their lives in America. Adela is working to become more fluent in English (despite her English already being better than most of her fellow Americans’ Spanish) and join the local community while Juan is finding it hard to adjust. It doesn’t help that some of his new coworkers at the Tucker family ranch harbor wildly racist, anti-immigrant sentiments. It’s only when the Forever Purgers target the Tuckers for their wealth that the family teams up with Juan, his coworker T.T. (Alejandro Edda), and Adela to get to Mexico, where the government is offering asylum to those looking to escape a Purge-crazed America.

“The irony of now having the first ‘American Dreamers’ coming into Mexico,” Gout says with a laugh. “It’s fantastic!”

By the end of the film, both Mexico and Canada have opened their borders to these “American Dreamers,” the first of their kind.

“Once they manage to heal and see the other human being, they don’t need to be friends, they just need to survive together, to recognize the other,” Gout says of the characters and the message behind The Forever Purge. “And that’s the beauty of this country, that it’s built on the shoulders of all the immigrants that built this nation. That’s the strength of it.”

The Forever Purge is now in theaters. 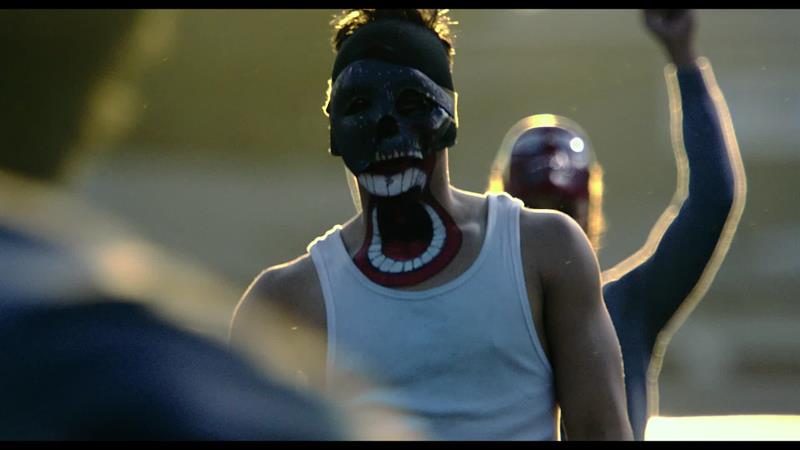