Forget Klingon: Give a listen to Avatar's Na'vi language

In James Cameron's upcoming sci-fi epic Avatar, the actors actually performed stunts—jumping, wirework, archery, even horseback riding—that were captured by sophisticated computers and used as reference for the computer-animated characters, but all agree the hardest thing they had to do was use the fictional alien language created just for the movie. Listen to it below.

The movie spends a lot of time on the jungle moon of Pandora, whose giant blue natives are called the Na'vi and who speak their own language, as well as English with a Na'vi accent. The language was created by linguist Paul Frommer with a vocabulary of more than 1,000 words, with accompanying grammar and structure. Dialect coach Carla Meyer worked with the actors to fine-tune the pronunciation. (Frommer, FWIW, is a big fan of the Klingon language created by linguist Marc Okrand for the Star Trek movies.)

"The way that the language was created, it started off innocently enough as I was writing the script," Cameron told a news conference in London last week. "I came up with some place names and some character names and so on. You know, I was just sort of free associating. And I had been to New Zealand a few years ago and really liked the sound of the Maori language and some of the Polynesian form, so I put that in. And when I found Dr. Paul Frommer, who is the head of the linguistic department at the University of Southern [California] in Los Angeles. He kind of started to riff on that, and he brought in different sounds from different languages. Some African languages, European languages, even some Native American sounds."

Examples: The traditional greeting among the Na'vi is "[Oel] ngati kameie" (I see you). A
"skowng" is a moron.

"Even the sounds you would go [makes a sound], like those things would take a lot of getting used to, and my mom would look at me like I was crazy," star Zoe Saldana, who plays Neytiri, told reporters last week in London.

Saldana found the vowels easiest to pronounce: "I speak Spanish, and these vowels are very similar to, you know, to the tongue. To Latin." 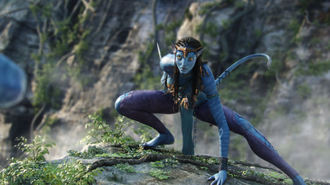 Things were more difficult for Sam Worthington, an Australian who plays an American marine on Pandora. "I have enough trouble with English," he said. "Plus having to be American, ... let alone Na'vi. So I kind of took the approach of, which is, I think it's a good approach, was Jake learns Na'vi, so, Sam didn't go to Na'vi school. I learned it as the movie went along. And I think then you're not having to deconstruct anything, ... and I think it helps more with the acting. He's learning as he goes, and I was learning as I went. I think it just made my job a bit easier. But yeah, it's definitely hard. I couldn't roll my 'Rs' and things like that, so Paul would definitely have to change certain things."

For Saldana, who plays a native Na'vi speaker, "the hardest thing for me was actually speaking English with a Na'vi accent. Harder than anything. Learning the language ... made it look like a piece of cake. Martial arts, the kick, the archery, the riding a horse without a saddle, was a piece of cake when it came to [saying in a Na'vi accent], 'You should not be here.' I'm like, 'Uh, God, it sounds like Queens.' It would always sound like Queens."