Forrest Ackerman memorabilia, including Dracula's cape, to be sold

Tag: Dracula
Tag: Forrest J Ackerman
This autographed first edition of Dracula is among the items to be auctioned.

Many of the costumes, props, books and other sci-fi and horror memorabilia once owned by the late Forrest J Ackerman will be auctioned off by Profiles in History the last week of April.

The items include Bela Lugosi's Dracula ring and cape, along with Lugosi's costume from The Raven; a signed first edition of Bram Stoker's Dracula, signed by Stoker and Lugosi, among others; and Fritz Lang's monocle from Metropolis.

Why do so many Dracula adaptations screw over Lucy Westenra?
The best, worst, and weirdest adaptations of Dracula

Bids can be placed in person; via mail, phone or fax; or live on the internet via Live Auctioneers.com.

Forrest Ackerman was an American collector of science fiction books and movie memorabilia and a science fiction fan. Ackerman, known as "Forry" or "The Ackermonster" or "4e" or "4SJ" or "Forjak," was influential in the formation, organization and popularization of science fiction fandom in its early years, and he served as a key figure in the wider cultural perception of science fiction as a literary, art and film genre. Ackerman is also remembered as the editor-writer of the magazine Famous Monsters of Filmland, as well as for being an occasional author, actor, producer (Vampirella) and literary agent. 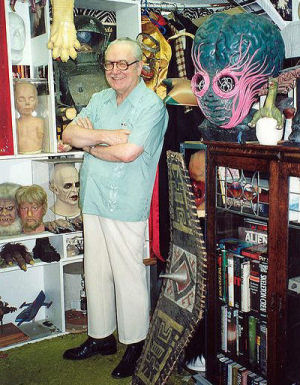 Forrest Ackerman in his "Ackermansion."

Ackerman was noted for having amassed an extremely large and complete collection of science fiction, fantasy and horror film memorabilia, which was, until 2002, maintained in a remarkable 18-room home/museum known as the "Ackermansion" in the Los Feliz district of Los Angeles, filled with 300,000 books and pieces of movie memorabilia.

He was credited with nurturing and even inspiring the careers of several early contemporaries, such as Ray Bradbury, Ray Harryhausen, Charles Beaumont, Marion Zimmer Bradley and L. Ron Hubbard.

The list of items, along with estimated sale prices: