After a series of hiccups during the first season of Fox's Dollhouse series—including scrapping the original pilot—executives of the network today promised they would leave creator Joss Whedon alone during the second season to do his thing.

"[The mandate is] to keep doing what he's doing," Kevin Reilly, president of entertainment for Fox Broadcasting, said in a press conference in Pasadena, Calif., as part of the Television Critics Association summer press tour. "That is really the gift of Joss. Some people can create a good show. Joss was pretty open about those hiccups. I think in the second half of the year, he found the show and started having fun with it. I don't think he was having a lot of fun early on, but he was fantastic to work with all the way through. The fact that he found that, it will be much smoother sailing this year."

Whedon was frank about the development issues, which also included the network's demand for more stand-alone episodes, as well as production halts and rewrites early on.

It came as a bit of a surprise when Fox picked up the low-rated series for a second season, and Reilly credited the fans' "Save Dollhouse" campaign with proving an audience for the show. "You mean on the 'Save Dollhouse' campaign that started before we even started making the Dollhouse episodes?" Reilly joked. "It didn't factor in from a fear place, [but] from a more positive place. Those fans were there every week, they nurtured the show, stuck with it the way other fans don't. Joss he gave us a consistent [demographic] rating that we felt [it deserved] another chance to give it a shot." 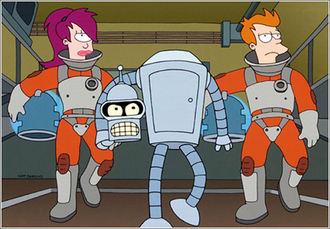 The Fox prez also addressed the future of Futurama, Matt Groening and David X. Cohen's animated sci-fi spoof series, which began as a Fox Sunday-night series, was canceled and is being resurrected on Comedy Central. Could Fox pick it up again?

"Well, it's going to do its run on Comedy Central, and [we'll] see how it fares," Reilly said. "It's not unprecedented. That's the Family Guy story. They saw a lot of commercial interest and fan interest. If we see a renaissance with the show—it's a good show, we really like the show—sure [we might pick it up]."

Fox has the option to bid on new Futurama episodes first, but Reilly indicated he won't take advantage of that. "There is a negotiated window," he said. "We've not committed to airing it."