It was a big year for sci-fi and fantasy television, with Walking Dead chewing up the screen, with The Vampire Diaries killing off its heroine ... kinda, and with American Horror Story getting its freak on. But what TV moments made us laugh or gave us the chills or broke our hearts? And what was our number one favorite moment of the year?

Counting down, here are 18 moments that stayed with us and had a big impact on their shows' stories.

18. Grimm - Juliette and the Captain kiss

Shocking! Never before have we seen a storyline where the hero's girl was more attracted to one of the bad guys than the hero. And yet, since Juliette woke up from her coma her attraction to Captain Renard has been undeniable. Sure, magic is at work, but what about Nick?!

While our top Supernatural moments over the last couple of seasons would have been Bobby's death and Dean killing Amy, they happened in 2011. But the final demise of Dick Roman was worthy, and while we're not quite sure why dispatching a Leviathan was harder than, say, taking out an angel or a demon or one of the Four Horsemen of the Apocalypse or Lucifer, we'll go with it. Dean and Castiel's sudden trip to purgatory has left vibrations all through season eight.

16. Eureka - Fargo learns that Holly didn't make it out of the simulation alive

We'll admit it. Holly's murder by Senator Wen made us mad. But it was the moment when Jo told Fargo, who was thrilled the Astraeus crew had been found so he could rescue Holly, that the love of his life didn't make it out alive. It was so sad. However, we weren't terribly surprised when the writers figured out a way to bring her back. 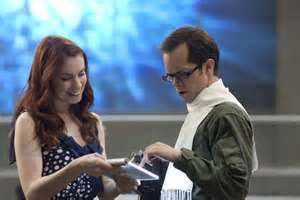 Oliver is nearly killed by the copycat Archer who is pretending to be the Arrow. The Dark Archer, who is just as good as Arrow, is actually Malcolm Merlyn, aka John Barrowman. So not only is Malcolm someone who should be at the top of Arrow's list, despite the fact that he's Tommy's daddy, he's also quite a badass.

Here's a look at the reveal:

While this wasn't our favorite season and Sookie seemed to vanish through most of it, the season-five ending gave us hope for season six. Bill goes total raging religious fanatic, drinks Lilith's blood and goes splat into a pool of blood. But out of that blood rises a blood-soaked naked Bill who promises to be one nasty evil Big Bad to come.

With Hicks in love with Dani and considering she was Rosen's daughter, her murder by Stanton Parish reverberated through the season and affected everyone on the Alphas team. Even Nina couldn't talk her into staying alive.

Here's the preview for the episode after, which provides a glimpse of the fallout:

Rats! We finally find out about Maggie's fascinating backstory and she gets gutted by a crazy guy who trained his dogs to do nasty things. However, Maggie's death also seemed to raise the stakes for all involved. In that moment, Charlie grew up and the group realized there was no going back. And for the show, it found its footing and went full steam ahead, finally living up to the promise of the pilot.

Here's a look behind the scenes, with Maggie's death scene toward the end:

The real and the fairy-tale worlds finally collide, and Emma Swan's at the heart of it with a sword. With Henry's life hanging in the balance, Emma finally believes and discovers she has to battle a dragon to save him. Too cool!

10. Teen Wolf - Allison's dad kills her mom before she can turn into a werewolf

This series is far better than its title, and the season had a lot of rich, wonderful angst for the young characters, as well as their parents. Allison's mom, Victoria, had become a great villain through the season. She even tried to kill Scott to keep him away from her daughter. She scared us, even compared to Allison's aunt and her nasty grandpa. But when she and her husband, Chris, chose her death over her becoming a werewolf after she gets bitten, it broke our hearts just a little. After all, what kind of a chance does Scott and Allison's romance stand if death is a better option to the Argent clan than becoming a werewolf?

The season's most heart-wrenching Teen Wolf moments are in this clip, including Victoria's death:

9. Falling Skies - The freedom fighters mount a rescue at the harness factory

We'd been seeing kids with harnesses, the creature that made them into compliant slaves, since the beginning of the series. But this season we finally got to see the horrifying truth of how the kids were harnessed in the first place. Gruesome!

Here's a behind the scenes look at how the crew came up with the harness idea and how that fed into the harness factory horror:

Since Rick found the survivors we'd been set up for this moment. Shane had plotted to kill Rick so he could have Lori and Carl, but in the end it was Rick who took out his BFF. Not that Shane didn't deserve it after the cowardly way he turned Otis into Walker food and all, but still, we'll miss Shane.

Who is Bloody Face? In this shocker, Lana thinks she's finally escaped the horror that was Briarcliff thanks to Dr. Thredson, only to learn things can actually get worse for her. Thredson is the original Bloody Face, and she's in his lair. Horrible things happen, including finding the dead body of her lesbian lover, Wendy. Poor Lana. Luckily, she's only got to survive four more episodes. Unluckily, it looks like she and Bloody Face have a bloody little bundle of evilness on the way.

Here's a fan made video with Zachary Quinto as Dr. Thredson and Bloody Face:

6. Chuck - Chuck tells an amnesiac Sarah their love story and gives her one magical kiss

It was almost a year ago when Chuck came to an end after five seasons, and all we really wanted was for Chuck and Sarah to live happily ever after. In the end, although Sarah couldn't remember him, they sat on a beach and Chuck told her their story. Then he told her that his best bud, Morgan, believed that one magical kiss would lead to her remembering everything. While we don't know if the kiss brought back her memory, we're pretty sure they lived happily ever after anyway, and we wouldn't have had it any other way.

5. The Vampire Diaries - Elena and Damon have hot vampire sex

Finally! After tangoing between Stefan and Damon for too many seasons, Elena makes a choice and it's Damon. After that the two have the blazing hot sex scene we've been waiting for. Only bummer, the cuts to Caroline and Stefan with all the Damon-accidentally-siring-Elena business. That could have so waited.

4. Game of Thrones - The Battle of the Blackwater

The episode, "Blackwater," was one of the best hours of television this year. It's impossible to choose just one scene from this action-packed episode, but we'll take the last five minutes.

3. Fringe - Etta is murdered by an Observer

Heartbreaking! Peter and Olivia are reunited with their adult freedom-fighting daughter, Etta, in the future, and have adventures with her while trying to defeat the Observers, only to have Windmark shoot Etta up close and personal. Too cruel.

2. Doctor Who - A farewell to the Ponds

Well, we knew it was coming for months, and yet it was tough to say goodbye to the Doctor's married companions, Amy and Rory. On deck for their departure were the Doctor's scariest new villains, those terrifying Weeping Angels, and a story that threatened to rip the couple apart forever. In the end, there was really no doubt that Amy would choose Rory over the Doctor, was there?

Here's the "Afterward by Amelia Williams":

1. The Walking Dead - Lori dies while giving birth and Carl does what's necessary

The second half of season two and the first half of season three were filled with so many powerful moments, Dead made our list twice and we didn't even manage to get the awesome fight with Michonne and the Governor in there. In this scene, Lori goes into labor while trapped in the prison with just Carl and Maggie. Walkers are at every turn, but the baby won't wait. So Lori gives her son, Carl, a talk and tells Maggie to cut the baby out of her stomach. It's all heart-wrenching and horrible in the most spectacular way. But the best/worst moment is after, when Carl decides to do what's necessary and goes off to put a bullet in his mom's head to keep her from turning into a Walker. Terrible, but the baby does live ... for now.

What was your favorite scene of the year?