Kirk Acevedo, who plays FBI agent Charlie Francis on Fox's SF series Fringe, told SCI FI Wire that he and the crew are already working on season two, though no official renewal announcement has come so far, and that upcoming guest star Leonard Nimoy will figure in it. (Spoilers ahead!)

In the meantime, tonight's episode, "Unleashed," centers on Acevedo's FBI character, Charlie, who's attacked by a mythological creature. The team of Olivia (Anna Torv), Peter (Joshua Jackson) and Walter (John Noble) rush to find a way to save his life.

"Charlie goes out on this call, and he gets attacked by this mythological, genetically enhanced griffin," Acevedo said in an exclusive phone interview last Friday. "He fights for his life throughout the episode." The episode also features Francis's wife, Sonia, played by Acevedo's real-life wife, Kiersten Warren.

The episode airs today at 9 p.m. ET/PT on Fox. Acevedo spoke about "Unleashed," as well as the show's season finale and the season-two episode he's working on (which implies he lives through "Unleashed" and that Fox will pick up the show). The following Q&A features edited excerpts of our interview.

Now Charlie's a trained agent. How does he let this griffin take him down?

Acevedo: It's a monster. I don't care how well trained you are, it's the world of Fringe, so there are bigger and badder things than yourselves.

Acevedo: Do you know the mythological creature the griffin? The tail of it is like a snake. He's got the head of an eagle, the body of a lion, the wings of a dragon. That's what it sort of is. I haven't actually seen it, because I haven't seen the final special effect of it. It's CGI. We just had to use the imagination.

How did you do the attack scene without a creature to work with?

Acevedo: I sort of just get attacked from behind, and the monster sort of impregnates me. Sort of like Aliens.

Are you playing the deathbed for the episode?

Acevedo: Yeah, I'm pretty much fighting for my life for an hour. Just conversations with the wife and saying "I love you" and everything like that, and a lot of pain. Just trying to be Charlie and control the emotions and not let them overwhelm.

How does Walter help find a cure for griffin impregnation?

Acevedo: Because Walter sort of created this monster. He sort of realizes it. This was part of Walter's research. 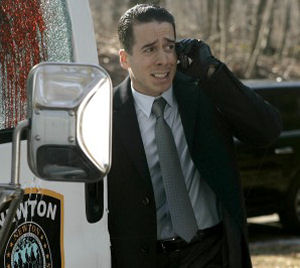 Did you insist on Kiersten to play Sonia?

Acevedo: I didn't insist. I suggested. To create intimacy with someone who you don't know is actually not going to work. So to have your real wife do it, then you can be a lot better on screen.

Does showing the personal side change how you play Charlie?

Acevedo: No, because at the end of the day, it's not a character-driven piece. When Charlie gives exposition on cases and stuff like that, there's really not that much you can give, character-wise. You really can't crack a joke here, smile here when you're talking about dead bodies. It's basically just picking your spots, so I would say no. ...

When do you wrap for the season?

Acevedo: We finish up in about six days. We just finished the finale. We're actually working on a stand-alone episode for season two.

What could you tease about the finale and next season?

Acevedo: Well, I'm sure you heard about who might be playing William Bell. Leonard Nimoy, so we pretty much meet William Bell in the finale, which is really cool. Just, you learn a lot more about Massive Dynamic and what's going on with the whole mythology of the show, so it's pretty much more cemented in the final two episodes. Then the stand-alone episode is pretty much a stand-alone episode. It doesn't delve into the mythology of the show or anything.

Are you back to exposition?

Did you get to work with Nimoy?

Acevedo: No, it's just Olivia meets him. I've got to be honest with you, I never thought of Leonard Nimoy to play William Bell, [but] of all the people I thought of down the line, I think he's actually perfect. People remember him as Spock on Star Trek, but he did tons of other stuff, [like] the Invasion of the Body Snatchers remake. I think he has the age, the depth, and that beautiful voice of his would be a perfect foil for John Noble.

What were you working on today?

Acevedo: Today, for the stand-alone episode, we show the body and the tease in the beginning. Then we just walk around, and we're just shooting that scene. We have a whole bunch of stunts, and that's it. Just little fight scenes and stuff like that.

What sort of case is the stand-alone episode?

Acevedo: There's a little bit of Ghost Whisperer in that episode. That's all I'll say.

When do you come back for next season?

Acevedo: You know, I was told we come back on June 24th, is supposed to be our start date.