Fringe is back with frozen heads, shapeshifters, Nimoy

Remember that frozen head that we last saw on a table being attached to a body in the Fringe episode "Momentum Deferred"? The one that opened its eyes at the end of the episode, teasing us that there was certainly more to come?

Well, it's been nearly two months, with a hiatus and intervening episodes (including one dealing with the Observers), but finally this month we return to the season's main story arc, which involved mercury-filled shape-shifting soldiers from another universe stealing frozen heads. And Olivia dealing with William Bell's warning, as well as Walter's role in all of this.

"As we get into December, there are more stories about Walter and the character we met at the end of episode 204," executive producer Jeff Pinkner told us. "The character with the little omega symbol on his head whose eyes pop open. He'll be making an appearance again."

There were hints that Frozen Head might just be the leader of the bad guys. He'll be played by Sebastian Roche (Roar), and the name of the character is Thomas Jerome Newton. We suppose it's understandable that it might take a couple months to recover from the whole decapitation business.

"Yeah, little while," said Pinkner with a laugh. He promises Newton will all be in one piece by the time we meet him again in the Dec. 10 episode.

"By end of the year we reveal more and more as we peel the onion back on what Walter's participation and responsibility was for the events we were seeing," said Pinkner. "This season all of our characters are going to potentially learn those truths."

Coming up on tonight's episode, "Snakehead," the team will run across bodies with slimy parasites attached to them. And one of them (according to the preview) just might have Peter's name on it. The team will also run up against a mysterious dangerous organization.

And then rumor has it Leonard Nimoy will return as William Bell along with the shape-shifters in next week's "Grey Matters," which finds the team investigating an odd brain surgery result. And Olivia makes a discovery on surveillance tapes. 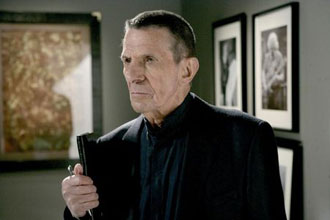 "I think for the most part Olivia will find this season that in order to identify and defeat the bad guy she's going to have to open herself up more," said Pinkner. "At the beginning of the season she was pretty much dealing with the consequences of crossing over from the other side, and now she gets to focus more on what William Bell warned her about, and she sees that the consequences of those things start to come true. Now she's going to have to deal with them, and, for the most part, that means she's going to have to allow herself to be open to what Walter and William Bell did to her as a kid. She's going to have to allow these inherent abilities of hers to come to the surface so that she can identify and then stop the people who are trying to open up [the] corridor to the other side. And she may fail."

But whatever happens, Pinkner promises we'll get some of our billions of Fringe questions answered, ... and "hopefully those answers will lead to more questions. That's sort of our MO, 'cause that's really the truth about the world, isn't it?"

Fringe airs on Fox on Thursdays at 9 p.m. ET/PT.