[We posted this last week, but are re-posting it here again now in light of tonight's new Fringe episode.]

Fox's mind-bending sci-fi series Fringe returns with the first of the final eight season-two episodes on April 1, and we talked with star John Noble (Dr. Walter Bishop) on the show's set in Vancouver, Canada, about the first episode back, "Peter," in which we learn the heartbreaking, shocking backstory of his character. (Big spoilers ahead!)

Much of the episode takes place in 1985, the year Walter Bishop found a way to save his son. We could tell you more, but then we'd have to kill you.

"It's interesting having played Walter 25 years younger. He's actually quite a likable man," Noble told a group of visiting reporters in the white lab set of Massive Dynamic. "He's married to a lovely woman, and he seems to enjoy his work. He's driven. He's a driven man. He's very smart, and he's very driven to succeed ...

"But he does make choices, and he makes that one error," Noble says. "It's like we do in tragedies, where one error will cause this tumbling effect. ... What he was trying to do was to play God, really. He was saying, 'Well I can fix this boy,' and he was playing God. In fact, he said, 'There's only one God in this lab, and it's not yours.' That quite an interesting theme to Walter that I find to this season so far." 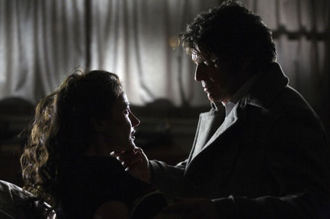 The Walter we meet is different from the one we know: younger, more energetic, more focused, more arrogant. And with longer hair.

"It's interesting, isn't it?" Noble says. "With younger Walter, there were a few simple things. One of them, obviously, he's younger and he has a different energy, so you know, when I had to run or move, I had to run or move as a younger man, which I hope I succeeded in doing. He doesn't speak like Walter today. He spoke very clearly and straight. These were the small things. And you should just see just a little bit of potential Walter in there. I hope you see a little tiny bit in there when he's in the lab, but not too much. That was the lot of it I played, just that little bit in there. But he was successful, and you can kind of see the charm that he has now as an older man. But he probably wasn't quite as likable when he was that age. So it was a good challenge, but really I had to just work on the physicalities and change those few things."

We also see younger versions of other characters, including Blair Brown's Nina Sharp, who may call to mind other roles Brown's played before. (We admit, we thought she actually looked kind of like Molly Dodd from The Days and Nights of Molly Dodd, her 1980s dramedy TV show.)

"Actually, I brought in pictures from Continental Divide [her 1981 romantic comedy] that I had done with [John] Belushi, because there was some talk about 'Oh, well, the makeup then was this,' and I went, 'I'm going to bring you some pictures. We're not even gonna talk what it was. This is what I looked like.' I thought I was really cute. [laughs] ... It was very strange. It was pretty fun."

We also get our first look at the "Walternate," the alternate-universe version of Dr. Bishop, about whom we will learn quite a bit more as the second season progresses.

"You certainly will see more of him," Noble says. "In the finale you'll see an awful lot of him. Again, it's a challenge. It's the same man, but with different choices made in life. And we often talk about that on Fringe, don't we? The parallel universe is like, the choices you make will help impact the rest of your life. So Walternate is in a different profession than Walter and a far different person, and he's physically different. He's a very powerful man, Walternate. I can't really say more than that, but he is different."

Fringe airs a rerun tonight at 9 p.m. before returning with the new episode next Thursday in its regular 9 p.m. timeslot.