Fringe second-season scoop from J.J. Abrams and his cast

"It should be returning," Abrams said in an exclusive interview. "I'm really happy with so much of what we did this year. And I feel like we have barely gotten going. There's so much that we know we want to explore and knew we did from the beginning. A lot of it is yet to come."

Abrams said the he and the producers already have some "cool ideas" for season two. "I think that season two should be pretty great, pretty dynamic," he said. "We have some cool ideas. I'm very excited about that. I'm proud of the group. My only regret is I wish we could have stayed shooting in New York. We had a terrific crew. That's the one thing I'd wish we'd be able to do differently. It's a show that's still, as it's going, evolving. Finding the balance between relatable characters and absolute science fiction takes a while, but I think we're getting there."

Fringe will move production to Vancouver, Canada, after losing tax incentives to film in New York's Manhattan and nearby Silvercup Studios on Long Island.

Abrams confessed that he has had very little do with his other TV series, ABC's Lost. "It really is Damon [Lindelof] and Carlton [Cuse] and Jack Bender [on Lost]," Abrams said. "They really are running that show and doing a spectacular job. There's nothing else like it on TV, and I think it's in all ways due to the work that Damon and gang do every week. They're incredible. My involvement in the show is zero now. Having focused on Star Trek and Cloverfield and Fringe, they haven't needed me at all, and they've made the show better and better every year."

"Next year, oh, absolutely, it's critical," Noble said in an exclusive interview last Thursday in Hollywood, where he sat on a panel for the show at the Paley Festival. "It's critical that they get together. I can't wait. Nothing this season, but I imagine there will be some fantastic scenes between Bell and Bishop. Bishop's never been in the room with his intellectual equal so far. Suddenly there's Bell, who's as smart as him. That's going to be fascinating. The writers will have a ball with that."

One episode of the second season is already in the can, even though Fox has not officially picked up the series. Joshua Jackson, who plays Peter Bishop, told SCI FI Wire not to read too much into that. 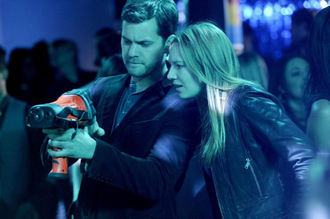 "[It's] for boring reasons," Jackson said in a separate interview. "They only had 22 airdates for our show this year, but they ordered 23 episodes, so we shot one for next year, which is just silly TV network stuff. It's not for any cool reason like we had something we needed in New York that we couldn't shoot elsewhere. It's just an accounting issue."

Show runner Jeff Pinkner explained how the 23rd episode would fit into a second season. "It won't be the first episode, and it probably won't be the second, but it'll be somewhere in the first batch of episodes," Pinkner said in a separate interview. "It's a stand-alone, but it still honors the condition that we know it will fall into the world."

Torv admitted that she was confused by the whole schedule. "That's why I'm getting confused, because that was the last episode that we shot, but that wasn't the finale," she said.

Pinkner added that a second season would make more use of Blair Brown as Massive Dynamic's Nina Sharp. The end of season one will set her up for a more prominent role. "Blair Brown is very much a part of the show," Pinkner said. "The story we're telling thus far hasn't gone through her character every week, but she's sort of around on the perimeter. We're going to find out that she has a lot more knowledge of the condition of the show than we've revealed thus far, and she's a big part of our plans going forward."

The cast and creators were hopeful that Fox would renew their show. Jackson suggested it is all but a done deal. "Until the ink is dry, you never ever want to say that it's happening, but they rented stages in Vancouver, so I think that's a pretty good indication," Jackson said.

Pinkner added his confidence too. "We have every reason to believe season two is going to happen," Pinkner said. "We have great confidence that we will be on the air in season two." Fringe airs Tuesdays at 9 p.m. on Fox. The first-season finale airs on May 12.

(This story was reported by Ian Spelling and Fred Topel.)