Torv and her Fringe co-stars and producers spoke exclusively with SCI FI Wire about the show's final season-one episodes on Thursday night at the Paley Festival in Hollywood.

The end of April 21's episode, "Bad Dreams," showed a video of young Olivia in a burnt-out room after one of William Bell and Walter Bishop's Cortexiphan experiments. Is she just a firestarter?

In a separate interview that night, show runner and executive producer Jeff Pinkner offered more hints about what Olivia's secret power really is. "We saw the consequence," Pinkner said. "We saw that she started a fire at the end of the last episode, but I think it's a mistake to assume that that's her power. I think the truth is, it's probably a consequence of her ability."

Torv also confirmed her scene with Nimoy, adding that it's calm yet threatening. "That's what's kind of cool about working on Fringe, is everything seems kind of calm and lovely, but there's always something going on underneath," Torv said. "Where she meets him is the cooler question, but I'm not saying any more."

Joshua Jackson, who plays Peter Bishop, addressed the mysteries surrounding his character. Though he was part of some of Walter Bishop's experiments, the season finale will confirm that Peter was not part of the Cortexiphan experiments. 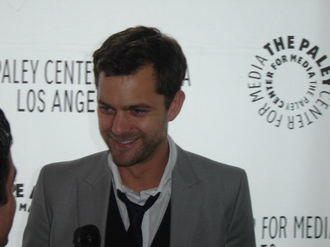 "There's a piece of information that gets revealed about Peter at the end that tells you why I think that," Jackson said in a separate interview. "It's the last thing that you learn. It's not something that Peter does. It's something that happens around him, and he's not even aware of, but the audience becomes aware of, and it sort of radically changes how you think about this guy."

On the matter of Peter, Pinkner revealed a much bigger question that will be asked in the finale. "'Is he Peter?' is a good question," Pinkner said. "'Is there only one Peter?' I think it's really exciting. We knew the secret of Peter before the season started, and it's been hinted at or sort of laid in in the architecture of the show since the pilot. We start to acknowledge to the audience what that secret is. He, Peter himself, will not learn the secret or one of the secrets at the end of this season, but we will."

John Noble, who plays Walter Bishop, described his work with Jackson in the finale. "I do a series of scenes with Josh Jackson at the end of that, which are really very beautiful," Noble said in a separate interview. "Walter has a manic attack, actually, which is quite scary. It's just the two of us. It's something I thought was really strong work. That's my favorite in the finale. It's pretty powerful."

Blair Brown is also returning for the final episodes of the show as Nina Sharp, the head of Massive Dynamic. Writer and producer Roberto Orci promised some answers for her character. "Well, you're going to find out what her connection is to the legend of legends, William Bell," Orci said in a separate interview. "Is she his protector? Is she his accomplice? Is she innocent?"

With a group of reporters, creator and producer J.J. Abrams compared the Fringe season finale to that of his other show on ABC. "Both Lost and Fringe, I think, give viewers a real jolt," Abrams said in a group interview on the red carpet. "I'm obviously proud to be associated with both."