"I'm sad to see Fringe end too, but I hope we're going to go out with a bang," said Jackson, who plays Peter, the character who was at the center of much of what happened over the show's five seasons.

"Creatively, I feel that the show came to a natural and satisfactory ending, so I hope that people will be satisfied with the way that we put the story to bed tonight. And I feel like, instead of either stretching the show on for too long or having it sort of cut off in an abortive way, I feel like we got to tell the ending of our story. So for that I'm really satisfied. But I will miss the people that I've been working with for the last four years," he said during a conference call with journalists this afternoon.

So what do we have to look forward to from the time-tripping, universe-hopping show when it comes to its final two hours, "Liberty" and "An Enemy of Fate"?

"The first of the two hours really deals with Olivia's story almost exclusively. It gives us in a very Fringe-y way a final invite into where she is or has been over the course of this season. So no one other than Olivia has much of any role, really, in that story. But then in the finale, as much as Walter may be called on to make a sacrifice and the gang in general is trying to implement Walter and Donald's plan, I feel like it, at least in the script, it read pretty fairly spread across all of the players. Everybody has their piece in the story. And then ultimately Peter's role, as it has always been, is to be the dutiful son and the husband and father. So that plays itself out in a really specific way. I don't want to tell you obviously how it plays itself out, but everybody is pretty engaged in the finale," said Jackson. 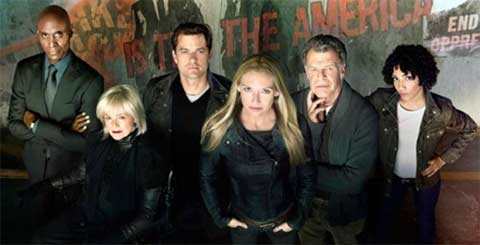 The actor has been thrilled by the evolution of Peter over the years. "What's most satisfying to me as an actor is the work that John [Noble] and I did. And ultimately with Jeff Pinkner and Joel Wyman to try and keep the father/son relationship as honest and dynamic as we could in the center of this very, very large, creepy science fiction story. So that was always a point of focus for me. And I think having the chance to be on a serialized TV show and to tell my piece of it, which was the story of the prodigal son who starts off doing everything he can to get out of this world, and then eventually gets drawn in through the love of his father and then falls in love with a woman. And then over the course of the season completely reverses his desire to now become a really dedicated son and a solid and reliable boyfriend, and then husband, and then a crazily protective father. I think that's an interesting journey to go on, and I think that the Walter and Peter story mirroring each other so distinctly in the fifth season is an interesting thing. For me as an audience member, I'm always most engaged by serialized storytelling. So I guess as an actor the thing that I take away from it is how much fun it is to perform a serialized story," he said.

One thing that helped creatively when it came to finishing the character's stories was knowing that the series had a final 13-episode season, said Jackson.

"To a greater extent than in any time in the prior seasons of the show, I was involved in the initial conversations about what season five would be. Wyman was incredibly open this year. Not just with myself, but I think with all the actors about what their characters would be and what their final arcs would be. And he gave all of us the signposts of what our season would be in a way that hadn't happened before, so he gave us the opportunity to plot out exactly how we thought we should be playing each of our individual characters. So from that standpoint it was tremendously satisfying," he said. 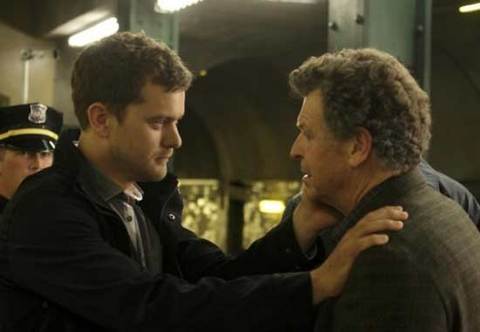 "The Peter as Observer arc I thought was quite interesting this year. ... Always to me what was interesting about Fringe was that even though that the larger story was as big as it can possibly be, saving the universe and doppelgangers and all the rest of it, the beating heart of the story was always the family tale. So I really enjoyed the fact that at the center of what was driving Peter and Olivia this year was both the recovery and the loss of their child, and them as a couple trying to grapple with that, both individually and together. I think we did a really good job this year of having the larger story driving forward, but then having the smaller interpersonal story be honest. As always, Peter and Walter are just inextricably linked, so Peter mirrored all the mistakes that his father had made all those years ago regarding Peter in regards to his own daughter. So yeah, I felt it was a very satisfying story and a proper way for our show to end when you see the finale tonight," said Jackson.

"I love the ending. I think it makes really good sense and it wraps up Peter's story in a way that is, of course, intertwined with all the characters around him, but specifically intertwined with Olivia and with Walter and with Etta, and I think it is a proper ending for the person and the story that we've been watching for the five years. And I feel that way truthfully for all the big three, Olivia, Walter and Peter," he said.

"For our story, it ends tonight. But the beauty of what Wyman's done is he allows the space for people to live on with these characters, should they desire to. I know that's a fuzzy answer, but I don't want to give away the plot details of the finale tonight," said Jackson.

While we'll be the judge regarding how well the series ends once we see the final moments of Fringe tonight, Jackson admits that it's the viewers who, in the end, have been responsible for the show's long journey. 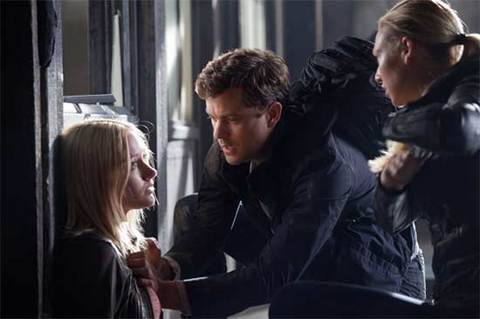 "It really is the audience itself, in our case, who continued to drive their own interest and continued to keep each other engaged as much as we tried to help them along, the community of Fringe became totally self-supporting. And I think that's actually one of the more, if you talk about Fringe not just being a narrative experience on screen, I think one of the more interesting things that's come out of it, is that community that's built around the show and how powerful that can be in tipping the scales toward the show surviving or failing. Because by traditional metrics our show would have been off the air at least last year, but probably two years ago. Except the passion of our fan base made it impossible for our show to be dismissed, maybe the way that even 10 years ago science fiction shows were often lost. So I think the fan base and the passion of the fan base is a large part of the story of the show of Fringe," he said.

Finally, Jackson had this to say to everyone who's watched over the years.

"To everybody who has come on this journey for these five years of this show, and I'm going to speak out of turn here because they're not all represented. But we collectively as a group, the cast, the crew the writers, are so thankful to the support that we have been given over these years and have been often in awe of the passion that people have felt for this show. So I personally, and I know we collectively, hope we finish this season and ultimately this series on a positive note tonight for the people who have given us so much over the course of the five years," he said.

The final two hours of Fringe airs tonight on Fox at 8 p.m. ET.