Before he started his landmark Song of Ice and Fire series of novels, which would spawn the Game of Thrones TV series, George R.R. Martin devised and edited Wild Cards, an ongoing anthology that built a gritty, realistic world of superpowered heroes and villains. Now Syfy Films will be bringing it to life at the movies!

The theatrical-movie partner between Syfy and Universal is developing Wild Cards as a feature film that will be written by Star Trek: The Next Generation veteran (and Wild Cards contributor) Melinda Snodgrass. Wild Cards tells of an alien virus that infects the populace of New York City just after World War II, killing 90 percent of the populace. The survivors mostly fall into two categories: Aces (a rare breed of people with enhanced abilities) and Jokers (who are twisted and deformed).

12 high fantasy podcasts that'll take you on an adventure during your commute
Game of Thrones cast speaks out on early sex scenes: 'It was supposed to be a closed set'

Since Wild Cards' first publication in 1987, the shared universe has seen 21 interwoven books hit shelves, all overseen by Martin but written by some of sci-fi's finest, from Martin himself and Roger Zelazny to frequent Doctor Who writer Paul Cornell. As Martin told The Hollywood Reporter:

"We had a love of comics books and superheroes that we grew up on... But we approached the material differently. We wanted to do it in a grittier, more adult manner than what we were seeing in the '80s. It's something that many other people have been doing in the decades ever since.

"One of the things we have going is the sense of history.... The comics in the mainstream are doing retcons [retroactive continuity] all the time. [Heroes] get married, then one day, the publisher changes his mind, and then they're no longer married. To my mind, it's very frustrating. [Our stories] are in real time. It's a world that is changing in parallel to our own." 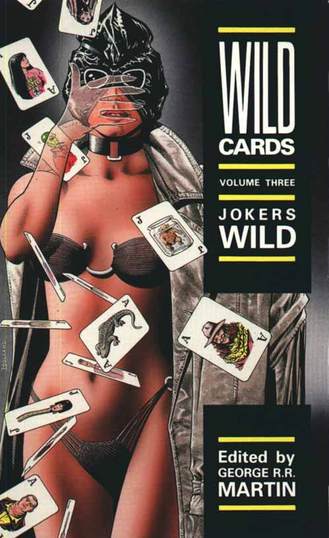 Which of the dozens of Wild Cards stories will form the spine of the feature film remains to be seen. When Heroes premiered—and, to a certain extent, when shows like Syfy's own Alphas followed—lots of fans felt it owed more than a little to the ideas first set forth in Wild Cards.

Let's see what happens when Hollywood goes straight to the source.