1st look at a startlingly different suit for that RoboCop reboot

We've had a look at the handiwork of OmniCorp, we've read the official synopsis, and now it's time to get a look at the cybernetic crimefighter himself. On-set pics have just revealed what Joel Kinnaman's RoboCop reboot suit looks like, and it's definitely a departure.

Kinnaman was spotted over the weekend on the film's Toronto set sporting what can only be the new RoboCop armor, and here it is. 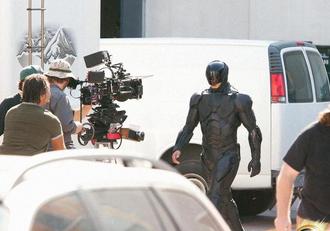 And just to make sure it sinks in, here's one with the visor-up option: 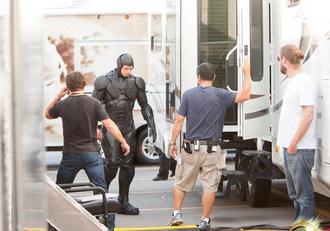 Well ... it's definitely not what Peter Weller wore. The silver exterior with black accents at the joints has been replaced by an all-black theme that looks a bit like Christian Bale's Batsuit. And the bulky, muscled look has been replaced by something much leaner. Also, he seems to have saved one hand from robotic reinvention. Unless there's some kind of massive CGI overhaul coming in post-production, this is a very different RoboCop.

Of course, we've yet to really see this new suit in action, and this could just be a part of what director Jose Padilha is delivering us, but it seems clear that there's a very different look in store this time around.

What do you think? Is the new RoboCop look a refreshing, modern take, or just a remake dud?