The fifth and final season of Fox's Fringe looks to throw out the biggest curveball yet, reportedly taking place heavily in the Observer-occupied future of 2036 glimpsed late last season. Want a sneak peek of the gang coming together 24 years from now?

We saw most of the classic Fringe Division already pop up in last season's "Letters of Transit," minus one very important person. We still don't exactly know how Olivia (Anna Torv) rejoins the team in the future, but we now have our first look at her adult daughter Etta (Georgina Haig) and Walter (John Noble) kicking around in season five.

We've assumed Etta would be sticking around for some or all of the future-set episodes, and if this photo is any indication, she could definitely be a major presence on the home stretch.

We're still about two weeks away from the season-five premiere, "Transilience Thought Unifier Model-11," but until then we have this pic from the premiere via TV Guide: 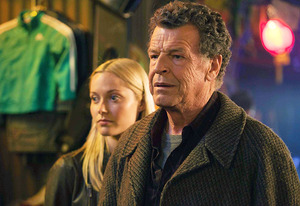 Of course, the real family reunion we're waiting for is for Etta to meet Olivia, though series star Joshua Jackson (Peter) has already stated that meeting might not go as planned:

"It takes on a slightly different flavor than I think you would anticipate. It happens quite quickly off the top of the season, and it's as emotional as you would imagine, but not quite the reunion that you're expecting."

What does that mean? We have no idea, but we can't wait to find out on Sept. 28.

How do you think the family reunion will go down?