We have an exclusive look at concept art from SCI FI Channel's upcoming movie event The Phantom, which depicts the proposed costume for the title character. You can see more after the jump.

The Phantom stars Ryan Carnes (Desperate Housewives, Doctor Who) as the title hero and as his alter ego, Chris Walker, in this re-imagined version of the classic comic strip, which has been updated to the present day.

In the two-night, four-hour event, Isabella Rossellini guest-stars as the villainous Lithia, the head of an experimental mind-control program. Also starring are Cameron Goodman as Chris Walker's love interest, Renny, and Sandrine Holt (24) as the Phantom's trusted advisor, Guran. 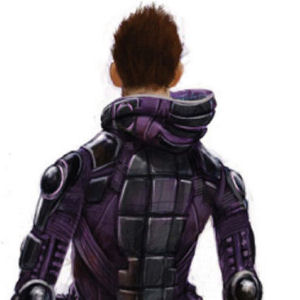 Here's how Muse Entertainment describes the Phantom's suit: "The Phantom's body suit is woven of a high-tech, nano-matrix, dark purple fabric, which is pliable, soft and also glitters with a dark metallic sheen. The fabric is a layered micro-weave of Kevlar, Twaron and Heracron fibers, skinned with a titanium-ceramic alloy neurosymbioticmesh, resistant to heat, bladed weapons, falls, impacts and small-arms fire.

"The nano-matrix fabric actually receives and amplifies intra-muscular nerve transmissions from the person wearing the suit to affect its density and movement—similar to modern bio-electronic prosthetics. Like an insect's exoskeleton, the mesh amplifies by a factor of 2.5 times the Phantom's normal output.

"The Phantom's ballistic vest and cowl helmet/mask are reinforced with contoured Chobham armor plates and wired for cellular and radio communication. The Phantom also wears black fatigues, and his purple and black boots are similar to sticky-soled rock-climbing shoes."

A favorite costumed hero for more than six decades, the Phantom relies on his wits, physical strength and skill with weapons over superhuman powers. And that suit.

Production began in Montreal under director Paolo Barzman (The Last Templar). The Phantom is slated to air in 2010 and is produced by Muse Entertainment.