Why Caprica's Sam Adama may need therapy thanks to Warehouse 13

A new bad guy is about to make some trouble for the gang at Warehouse 13 this season, and you're going to get a chance to meet him tonight. Actor Sasha Roiz, who starred on Caprica as Sam Adama and is a regular on the upcoming NBC series Grimm, is ready to rumble when it comes to the artifact retrieval business.

EXCLUSIVE: Warehouse 13's chief talks the show's end and why 'we got to do it right'
13 supernatural TV series that (lovingly) ripped off The X-Files

As to the specifics of who his character, Marcus, is, "it's a little bit of a mystery which will be revealed later in the season, so I can't tell you specifically," he said. "But I'm definitely part of the nefarious force that's working against the Warehouse this season. I'm certainly not alone in that. There's a few people that I work in conjunction with which are also some interesting guest stars that you'll see. But I can't tell you the specifics of it because there's a little bit of a mystery revolving around Marcus specifically."

Tonight's episode, "Love Sick," features a wealth of guest stars, including the return of The Bionic Woman's Lindsay Wagner as Dr. Vanessa Calder and Star Trek: Deep Space Nine's René Auberjonois as Hugo Miller, along with Roiz's new character, Marcus. In the episode, Dr. Calder attempts to solve a mysterious illness, while Pete and Myka attempt to unravel how they ended up in bed together without any clothes and with no memory of how they got there. 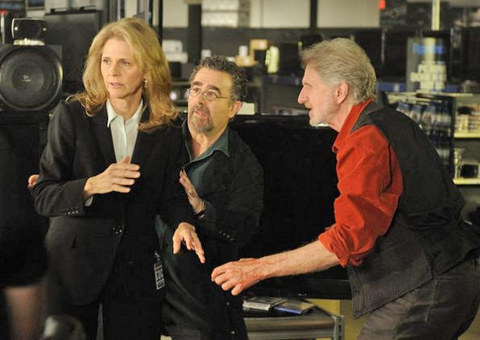 As for Marcus, beyond the fact that he is a mysterious bad guy, Roiz had this to say about his character. "He plays a ukulele and—no, I'm just kidding.—What can I tell you? I can't. I don't think I can say much more than I already have without getting myself into some trouble. But he looks good in black. Let's just say he looks good in black," said the actor with a laugh.

"I always root for the bad guy. I just love them. They're interesting to me for some reason. I don't know what that says about me or how much therapy I'm going to require. But whatever. It just is a lot of fun."

While we're not about to learn many specifics about Marcus, he did provide three adjectives that tells who his character is. "Three adjectives? Focused ... and exacting ... and complex," said Roiz. Well, that explains everything.

Roiz did part with this comparison between his Caprica character, Sam Adama, and Marcus. "The main difference is that Sam Adama is very much his own man, and he has his own moral code, and Marcus is ... hmm, how do I dance around this? I mean, they're very different characters. I think Marcus is a bit more of a henchman than Sam. Sam really believes in the world he lives in and his place in it, and Marcus' situation is not quite the same," he said.

One other little detail that we were able to get out of the cagey actor is that Star Trek: Voyager's Kate Mulgrew's upcoming character will have some sort of connection with Marcus. "There's some storyline connections, but I'm not going to disclose too much. But I did get to know Kate, and she's great. Yes. She's absolutely lovely, and it was a real pleasure to meet her. You know, there are times on shows where it's fun to just be a fan of the people you work with."

Roiz will appear on several episodes this summer. "I'm there for a good chunk of the season, so you'll be seeing me," he added.

As for Roiz's role in Grimm, he plays Capt. Renard, and will be a regular in that series.

"You've got David Greenwalt and Jim Kouf, executive producers from Buffy the Vampire Slayer and Angel, so that's already a certain level of expertise and fan base that you could rely on. And then you've got a terrific cast. And it's the first time you're going to see a police procedural mixed with a fairytale setting," said Roiz. "It's very dark and quite scary at times, and it's quite beautiful, actually. I saw the pilot. It's beautifully executed. So I think the fans of this genre and the sci-fi genre are going to be quite entertained."

His character is "the chief of police, and there's going to be a lot of layers to him, too. So it's going to be an interesting character to watch unfold. There's definitely some interesting storylines that they've come up with. But yes, it's going to be very exciting and very fantastical and very grand in nature in the show. So I'm looking forward to seeing what our writers bring, you know, when we finally get a hold of the scripts. I'm very excited to see them."

Roiz's other big project is an independent sci-fi film called Extracted, about a man "who creates this machine to help assist people through trauma so he can go into their memories and see their memories and help them uncover certain things in their past. And in doing so, gets trapped in the memories of this one criminal. And, he's trapped in there for a year just trying to get out. And so that's basically the premise. Him trying to get extracted from the memories of this man. It's a great piece, and I'm quite happy with it. So we'll see what happens with it, if it gets accepted to some of the festivals" it's been submitted to, he said.

Regarding his recent wealth of sci-fi roles, Roiz admits he's enjoying the work. "I think it's a very liberating format, because you could really approach certain topics whether directly or tongue-in-cheek and have a lot of room to investigate them, which you can't really do often or as easily in conventional TV or mainstream television."

How do you feel about Warehouse 13 so far this season? Does it need a new bad guy?