Last season on Fox's Fringe, we discovered some of the secrets regarding shapeshifters, the Observers and Walter's past. This season, which premieres tonight at 9 p.m. ET, expect more of everything—including two sets of opening credits and multiple Olivias, Walters, Broyles and Astrids ...

... not to mention entire episodes dedicated to each universe and even more gruesome murders, according to executive producers Jeff Pinkner and J.H. Wyman.

"We loved the idea of opening the show up," said Pinkner. "Last year we explored a little bit of what the alternative universe is like. Enough to get an idea of what the conditions are like over there and who the players are over there. We left Olivia there, and we brought Bolivia [or Bad Olivia] back, rather than putting everything back to the status quo right away. We want to explore our character in jeopardy over there. And then our team in jeopardy over here, because they don't known there is a spy in their midst."

"We got really excited about that, being able to tell two very compelling mythologies," added Wyman. "One over there and one over here, and having two shows about one show, which we felt hadn't been done before. Like Jeff said, it really enables us to tell some incredible stories over there as well. Because they are in such a state. The universe there is in such a state that it lends to more compelling stories and weird, freaky things than we can do over here. So it has presented itself as a huge opportunity for us." 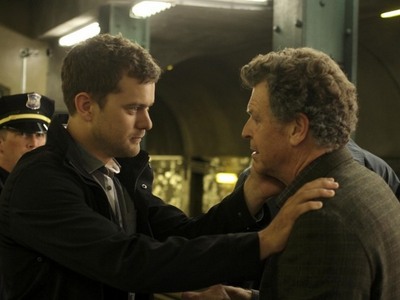 Since episodes will take place primarily in one universe or the other, the producers have added special coloring for the opening credit sequences — red for over there (aka the alternate universe) and blue for over here (aka our universe).

"At least initially, for clarity's sake, and to get traction in the story — because the story is either taking place over here or over there — we're not going to cross streams too often," said Pinkner. "We will make references to what is going on on both sides in each episode. And then once we get our footing and the stories start to collide within an episode, the two universes will be colliding. Not necessarily making conflict, but we will be going back forth within an episode."

Spending all that time over there allows the executive producers a chance to do something they love. "It's really an opportunity of world build specifically ... the idea of what would our daily life be like? What would our universe be like? What would our world be like if certain decisions had just been made differently? ... The most obvious one being if the White House had been hit instead of the Twin Towers. If, as intentionally intended, the Empire State Building was a docking station for zeppelins and the Hindenburg had never exploded and people traveled via zeppelin. What consequences would flow from these things?" asked Pinkner.

But it's the other types of consequences — those involving the choices and life experiences the alternate universe doubles had — that offer a chance for the writers to take Fringe's storytelling to another level this season, said Wyman.

"Not to mention we have one of the most unique potential love triangles in that it's one guy with two different versions of the same girl," said Wyman, speaking about Olivia/Bolivia and Peter's possible romance. 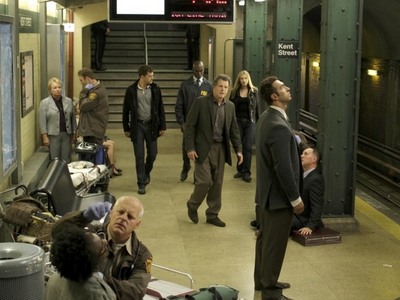 "We get to really spend time with a different version of Broyles. One who is still married and the consequences and how he's different as a person. We get to really experience what Bolivia's life is like. Our Olivia was essentially abused as a child. She was given these experiments which changed her worldview. Bolivia that never happened to. Charlie on the other side is still alive and has a different life," said Pinkner.

Yes, Charlie fans, that means Kirk Acevedo will be recurring this season. Seth Gabel, who we last saw nearly burnt to a crisp, also returns as Lincoln Lee, one of the Fringe team over there. As for guest stars, Amy Madigan will play Olivia's mother.

Bolivia will have her own challenges in the over-here universe. She's been told by Walternate, the alternate version of Walter, that their alternates are "monsters in human skin. He doesn't mean it literally. He means they're the enemy. They're the ones attacking us," said Pinkner. "She's now going to spend time living with our characters. Living with Walter, living with Peter, living with Broyles and just exploring our world and, of course, it's going to affect her worldview. Of course, that's one of the things that we're really interested in. At the same time she's an agent with a mission, and she's very loyal and dedicated to the life she's living and to the people she works for."

As for Astrid, her alternate is considerably different and has a form of Asperger's that allows her to react to information in an entirely unemotional way, said Wyman. Over there has been devastated by the cracks in their universe, and their solution, to fill the affected area with amber, forces them to sacrifice thousands of people at a time to stop the damage. "Astrid serves as a great utility for the Fringe team over there. She can look at data and make calculations and assumptions that people who would have emotional response to that data could not make," he said.

When it comes to Walter and Peter, who are still dealing with the fallout after Peter learned that he was taken from the alternate universe as a child by Walter when his own Peter died ... well, their relationship will evolve, but it won't be an easy evolution.

"There's so many difficult, muddy, ugly things in a true father/son complex relationship that, once we started looking at that portion of our program realistically, we realized we had a lot to play. We realized that we could give John [Noble] and Josh [Jackson] something to really chew on this year that's different from last year, but just another shade," said Pinkner. 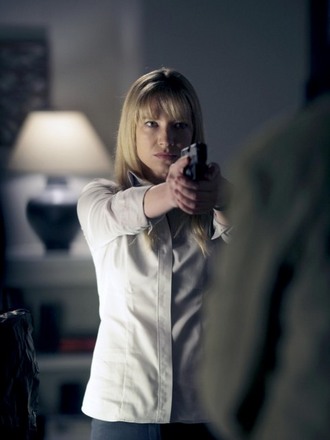 And then there's that doomsday machine over there from last season that Peter appeared to be the key to, that just might be Walternate's plan to destroy Walter's universe. "We will explore it, we will learn more about it, and ... what we're really interested in is how that's going to affect Peter as a person," said Pinkner.

While the executive producers are thrilled with the possibilities that Fringe's new third season offers, their mission is also to make sure that the series is accessible.

"It's very important to constantly try to attract more viewers and to try and not make the show alienating. ... Our solution came in the form of 'White Tulip' and episodes like that, because we realized what we need to do to satiate both our hardcore fans and our financial responsibility is to create a term that we coined, a 'mythalone,'" said Wyman. "It sounds really simple when you say it now, like, 'Yes, sure, you have a great standalone case, plus you thread in some great mythology.' But I've got to tell you, it took us a long time to get there and realize it. Now we have that our template for telling stories that we think satisfies both parties."

Here's a preview of tonight's premiere with some cast interviews:

Are you jazzed that the Fringe season-three premiere is finally here?