Thorin Oakenshield sure is one seductive Dwarf in new Hobbit pic

Captain America and Hobbit actor Richard Armitage is turning 41 today. So what does the official The Hobbit movie Twitter page do to celebrate his birthday? Why, they tweet this awesome high-res pic of the actor as the fearless leader of the company of dwarves, Thorin Oakenshield.

The first part of Peter Jackson's now-trilogy of films The Hobbit is set to be released in theaters on Dec. 14, 2012, with part one still titled The Hobbit: An Unexpected Journey.

Hobbit Day: Celebrating the brilliant performances in The Hobbit trilogy
The Hobbit star Richard Armitage signs on for killer role in NBC's Hannibal

Bilbo Baggins is swept into a quest to reclaim the lost Dwarf Kingdom of Erebor from the fearsome dragon Smaug. Approached out of the blue by the wizard Gandalf the Grey, Bilbo finds himself joining a company of thirteen dwarves led by the legendary warrior, Thorin Oakenshield. Their journey will take them into the Wild; through treacherous lands swarming with Goblins and Orcs, deadly Wargs and Giant Spiders, Shapeshifters and Sorcerers. Although their goal lies to the East and the wastelands of the Lonely Mountain first they must escape the goblin tunnels, where Bilbo meets the creature that will change his life forever ... Gollum. Here, alone with Gollum, on the shores of an underground lake, the unassuming Bilbo Baggins not only discovers depths of guile and courage that surprise even him, he also gains possession of Gollum's "precious" ring that holds unexpected and useful qualities ...

And now here's the icing on Richard Armitage's birthday cake. 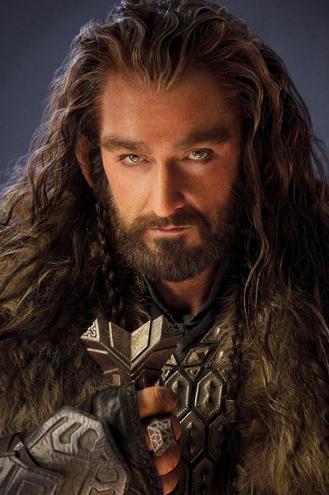 Happy birthday, Mr. Armitage! Now if we close our eyes, blow on the picture and make a wish, we wonder if we'll get a special present. Oh, right. It's not OUR birthday. Oh well! We'll just go back to looking forward to part one of The Hobbit later this year.