When you're busy promoting a film called G.I. Joe: The Rise of Cobra, it's inevitable that the talk will come around to action figures and sequels. And that's precisely what happened when G.I. Joe stars Channing Tatum, Marlon Wayans, Sienna Miller and Rachel Nichols sat down to chat up the Friday release during exclusive interviews this week in New York.

In the film, the forces of good and evil—the G.I. Joes and the COBRA organization—go at it again and again, with no less than control of the world at stake. There are hand-to-hand battles and tank and plane fights, not to mention frenzied chases beneath the sea and above the surface. Among the combatants are Joes Duke (Tatum), Ripcord (Wayans) and Scarlett (Nichols), while Ana/the Baroness (Miller) is a leather-clad COBRA through and through.

Who wanted to star in G.I. Joe, who didn't and why
Sienna Miller hams it up as the Baroness in G.I. Joe

So let's get to it with those questions and answers about the toys and the inevitable sequel: 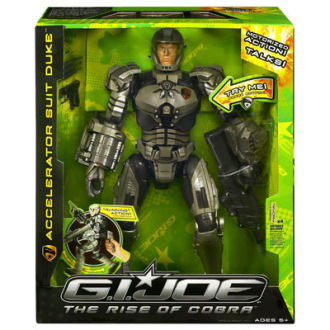 What did you all make of your action figure?

Nichols: It's surreal. It's cool.

Miller: It is cool. I just met my collectible one, and I loved it. I really loved it. The little ones are quite funny, but really flexible and cool. It's exciting. It's just surreal.

Wayans: I think my action figure looks a lot better than me. I am not that handsome, but I'm glad that my doll is.

Tatum: I think mine is pretty good, man. It's pretty accurate. I don't know how they do it, but they do it well.

G.I. Joe is an origin film that introduces the universe and establishes the characters. Assuming that this first film is a hit, what would you like to see in a sequel?

Wayans: More weapons and more hand-to-hand combat for me. And more scenes with [Tatum], I think. I'd like us to do some real tandem stuff and have a lot of fun and play with the characters. Duke is the guy that wants to be in the fight, Ripcord is the guy who wants to fly over it, and so just playing that duality, I think, will be interesting.

Miller: We'd like it be on Cobra Island and shoot maybe in Hawaii or Bora Bora, somewhere like that we're pushing for. I'd like to stay evil. I think the Baroness will always be a baddie. I'd like the relationships to continue, just more action, more of the same.

Nichols: And they're so creative. I'm sure that once we get a draft of the new script they will have clearly thought of things and introduced new characters that we would never have thought of.