Krakens have been one of Hollywood's favorite monsters of late. Whether it's the soul hunter for Davy Jones' locker in Pirates of the Caribbean or Liam Neeson's weapon of mass destruction in Clash of the Titans, krakens make for great VFX forces of nature in blockbuster films.

What if we told you they might really have existed? That's what one paleontologist thinks.

9 crazy sci-fi movie monsters that are nothing but mouth
Clash of the Titans 3 on the way ... already? Really?

Mark McMenamin believes the evidence for a prehistoric kraken lies in a mass dino-dolphin tomb in Nevada, otherwise known as Berlin-Ichthyosaur State Park.

This park is famous for housing the remains of nine 45-foot ichthyosaurs, otherwise known as large marine reptiles that resemble dolphins and died out about 90 million years ago.

When you look at the picture you can see that the arrangement of the dolphins seems to be held together in a mass grave, which is believed, by McMenamin, to actually be a giant cephalopod tentacle. This linear arrangement is similar to what modern octopi do to their victims. 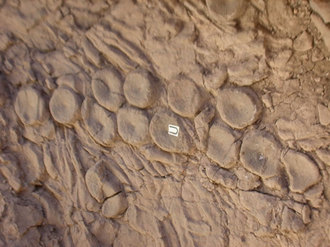 "Modern octopus will do this," McMenamin said. What if there was an ancient, very large sort of octopus, like the kraken of mythology? "I think that these things were captured by the kraken and taken to the midden, and the cephalopod would take them apart."

Until McMenamin's theory is proven, the kraken will continue to be the subject of much myth, as hard scientific evidence for krakens have never been found. The closest thing to such a beast is the modern-day giant squid.

Well, looks like Steven Spielberg just found a great premise for a Jurassic Park IV. Perhaps a Triassic-era kraken finds its way to North America and destroys California. And there's always the film Kraken Night 3D that could get made ...

What do you think about these findings? Do you think we will see more krakens in film and TV?

(via Geek Tyrant and GeoSociety.Org)