Actor Jorge Garcia thought it was going to be a while before his next gig came through after he finished playing the beloved Hurley on Lost. Not so. Luckily Garcia was cast in the new brain-twisting mystery Alcatraz, from Lost's J.J. Abrams, which premieres tonight in a two-hour opener on Fox.

"I was kind of prepared to wait a while," said Garcia in an exclusive interview with Blastr. "I thought there might be a moment that people would need to forget Hurley before they'd start paying me as an actor who can play somebody else. And so I was just like, 'Maybe it'll take some time before the next thing shows up that I'm excited about doing.' But Alcatraz fell into place so soon, and it was just a great opportunity to get to work with the same people making the kind of TV I'd like to watch. I was happy to be a part of it."

Alcatraz follows a San Francisco cop named Rebecca Madsen (Sarah Jones) as she begins investigating a murder that leads her to a suspect who supposedly died decades earlier at the infamous Alcatraz prison. Joining her in the investigation is Alcatraz expert Dr. Diego "Doc" Soto (Garcia) as they find themselves working for a mysterious government agent named Emerson Hauser (Sam Neill). 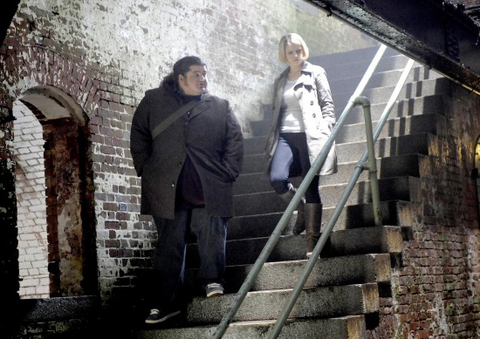 The duo discover that in the 1960s more than 300 prisoners and guards disappeared without a trace from Alcatraz. Now some of history's most dangerous criminals are returning one by one without having aged and without knowing where they've been for five decades.

While Doc may be an unlikely hero, his in-depth knowledge of Alcatraz, his intelligence and his background as a comic book enthusiast help make him the perfect partner for Detective Madsen.

Watch a few minutes of Doc in Alcatraz and one thing that becomes obvious is that Doc isn't Hurley. "That was exciting for me, just getting to explore a new guy. There's always going to be certain bits of my sensibilities that are going to sneak into the characters I play, just 'cause I like to put a piece of myself in everything. It makes things more personal when I play them. But then, in a sense, where Hurley was the guy that everybody liked and he got along with everybody, maybe Doc will have moments where he's a bit anti-authority, or maybe today he came into work and he's got a chip on his shoulder, or he doesn't want to get the job that he's being volunteered to do in a certain situation. Just moments like that. Or like maybe this time, maybe he's not going to tell the truth," said Garcia. "Playing that up and finding those moments and having the writers see that as well and give me moments like that to play has been really fun. There was definitely a certain simple quality that Hurley had, and Doc is a lot more intelligent. He's got two Ph.D.s."

And his interest in comic books gives him a bit of an eccentric edge. "The comic book thing comes out, in the sense of a little bit of rebellion against his family. He comes from a family of intellectuals, and him opening a comic book shop might make him a bit of a black sheep in their eyes. But it's more just out of his love and what he's excited about, that he's excited to, in a way, just live the life he loves," said Garcia.

Expect Doc to offer up plenty of possible theories as to why the inmates and guards of Alcatraz disappeared in the first place and why they are returning. 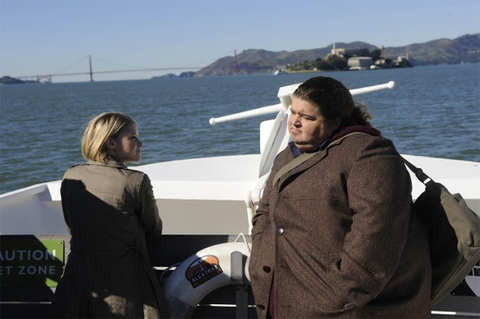 "The thing about Doc that we're discovering is that he doesn't necessarily have one theory as to what's going on. He's been exposed to enough theoretical physics ideas that there's a few possibilities, and he keeps putting them out there to see which one seems like it sticks as more information gets revealed. So he's not completely committed to one thing or another as far as an explanation to how all this is happening," he said.

While Doc might not seem like your average hero, "on paper, this would be Doc's dream job. He's fighting crime, and he knows as much about Alcatraz as he does because he's obsessed with Alcatraz. But then there's the rude awakening that 'Oh, this isn't a comic book world.' People get hurt. These are real people who are dying. These are real people who are getting shot at or kidnapped or whatever," said Garcia.

The realization that some of the most violent criminals throughout history are running loose in his world "is more than he had anticipated. And because these are the worst of the worst, he knows how bad these people are. But it's the idea of 'They're bad on paper,' is one thing. But now they're bad in reality, and it is much, much scarier," he said.

"He has to immediately get tough to be able to accept all this and still be a part of it. Because no one can help these people like Doc can. ... I think that in a way he's got to figure out how to find his inner police detective."

Garcia believes that if you tune in tonight, "we're good enough to get our hooks in and keep you interested in it. Alcatraz has a lot of great elements. I think we're worth a first viewing just based on the title alone. And I think we deliver. It's a way to think of Alcatraz that's never been done before," he said.

And if Alcatraz manages to have the type of long run Lost did? "I could do it. I could have a very good time doing this show for a while," said Garcia.

Alcatraz airs its two-hour premiere on Fox tonight at 8 p.m. ET, and then moves to its regular timeslot on Mondays on 9 p.m. ET beginning next week.

Do you think Alcatraz has what it takes to be the next Lost?