Green Lantern's villain speaks! What about that big head?

Despite rave reviews for his turn in his latest film An Education, Peter Sarsgaard hasn't gotten a big head—yet. That may change, literally, when the actor goes before the cameras in March in the role of Green Lantern's villainous Hector Hammond, the infamous massively domed telepath with the tiny, withered body.

Sarsgaard's excited to wrap his brain around the role. "It's something completely different for me and something that I've not done before," he told us at the Santa Barbara International Film Festival, where he received a Cinema Vanguard Award. "I imagine that if I'd done 10 of them I wouldn't be as excited as I am, but it's not the kind of thing that I normally do. It feels expansive to me. It feels like shackles being taken off instead of being put on. I just feel like I can do anything with this role."

11 most ridiculously overpowered superpowers in sci-fi history
The Flash: Diggle's return will deal with aftermath of that Green Lantern tease in Arrow finale 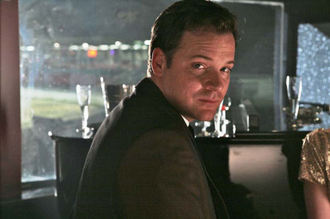 Peter Sarsgaard in An Education

Sarsgaard said "meeting [director] Martin Campbell" was what hooked him on taking on the enemy to Ryan Reynolds' ring-slinger—he wasn't initially familiar with the comic-book villain. "I can't really talk much about it, because we have to protect it, but it's a very, very fun role, and I just don't get the opportunity to play a role that is so expansive and delicious—and it really is!"

He's mum on whether the movie incarnation of Hammond will be visually faithful to the comics version first drawn by classic Silver Age artist Gil Kane, but he claims he was not taken aback when he first saw the original incarnation. "No," he chuckled. "I think it's awesome!"

For the latest sci-fi news, follow us on Twitter at @scifiwire
Tag: Green Lantern
Close Search Return to SYFY homepage.