We got a little private time with director Joe Dante to talk about his new 3-D horror film, The Hole, at San Diego Comic-Con last month, and I was so excited to speak to him that I couldn't help mentioning that not only did I still love to watch Gremlins, but I also had a Mogwai in my backpack as a kid.

Dante's been heading back into the horror genre with his episodes of Masters of Horror and now The Hole. I told him that I hadn't found a lot of information on it while I was doing research. "Yeah," he said. "It's been really under-represented, because it's one of those movies that has to come from nowhere, and we didn't want a lot of stuff to get out about it. It wasn't listed in Variety as in production or anything like that. So, basically, we'll be able to hit the world anew."

Steven Spielberg saved Gizmo from being the leader of the Gremlins
The horror of toys: Everything you didn't know about Small Soldiers

He gave us a little info about the story. "Basically it's an attempt on my part to go back to the '80s, where the idea was to make movies that you could take the whole family to but were scary," Dante said.

Dante added: "And it has some adult themes, but they're very hidden. ... The storyline is that we meet our family, which is a mom and two kids—one 17 and one 10—who move to this kind of dull suburban home from the bustling excitement of New York City. The kids are kind of miffed about that. And we know there is some kind of mysterious reason why they've moved here. ... When the kids are kind of bored, they go down in the basement, and they find this door with locks on it that leads down into the floor. ... Of course they want to open that door and see what's in there. And with the aid of the girl next door, they succeed in opening this hole, which seems to have no bottom, and during the night, things come out. ... I can't tell you what they are, but I guarantee it's not what you think it is." 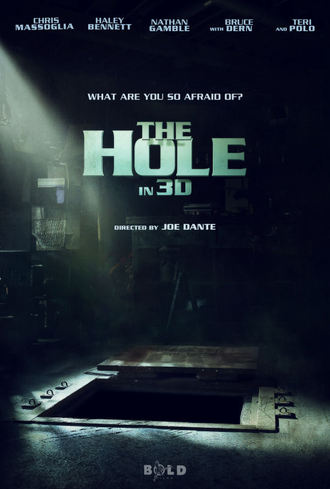 I asked Dante what he thought about the trends in current horror films, from Japanese remakes to torture porn. He said, "Well, that is an area that it's gone into," he said. "Some people think there are political reasons for that. I'm not going into that. But it is obvious that the genre is going to hit a dead end if it keeps going in that direction. There's only so many things you can do to the human body. I must confess, I thought that earlier ... maybe there is no limit, ... but after a while I do think it's kind of deadening."

We also talked a little about doing a film in 3-D. He said it has a different set of challenges, but that he'd do it again right away. "It's a technically difficult process, but not that difficult once you master it," he said. Like everyone in the 3-D club, he really didn't want it to be used as a gimmick but rather wanted to use it to pull people into the story.

I had to ask if he has a cameo in Alexandre Aja's upcoming Piranha 3D, as Dante directed the original Piranha all those years ago. "You know, it's funny you ask that," he said. "I was supposed to have one. He asked me. Alexandre asked me to do it, and I was so busy finishing this movie ... I said I would do it, and I thought I was going to do it in Hollywood. But he was in Lake Havasu, which is in Arizona. And when I found out it was that far away, I said, 'I can't do this. I can't go that far. They need me here.' So, unfortunately, I didn't get to do it."

I asked if he minded people redoing his films. "I've ripped off many a movie in my day, and I don't see any reason people shouldn't rip off mine," he said with a laugh.

The Hole doesn't have a release date yet, but Dante says to expect it soon.