Set to be released May 17, 2013, J.J. Abrams' highly anticipated Star Trek sequel features the Sherlock actor as the main protagonist of the film, and he's touted as being "a one-man weapon of mass destruction."

Just looking at this gritty poster, we don't have any trouble believing that. Cumberbatch's character stands among the ruins of a world destroyed.

Pretty intense stuff, if you ask us.

Again, this is Star Trek Into Darkness' official synopsis:

When the crew of the Enterprise is called back home, they find an unstoppable force of terror from within their own organization has detonated the fleet and everything it stands for, leaving our world in a state of crisis.

With a personal score to settle, Captain Kirk leads a manhunt to a war-zone world to capture a one man weapon of mass destruction.

As our heroes are propelled into an epic chess game of life and death, love will be challenged, friendships will be torn apart, and sacrifices must be made for the only family Kirk has left: his crew. 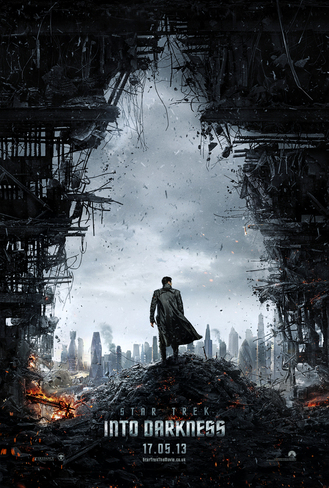 So what do you guys think about this awesomely gritty poster? Does it leave you craving more? Does it make you feel like Cumberbatch's villain will be a worthy opponent for Capt. Kirk (Chris Pine) and the crew of the Enterprise?