Chuck stars Joshua Gomez—who plays Morgan—and Sarah Lancaster—who plays Chuck's sister, Ellie—both got to work with Kreuk. "I have a couple really, really fun scenes with her," Gomez said. "She was great, by the way. She is excellent, really talented actress, really adorable and beautiful and the whole thing. She was really, really cool, and to walk into our group, I think she would look at me and Zach [Levi] sometimes like, 'What the hell world am I on?' Because me and Zach just have our thing, and she's just like, 'Oh, you two are out of your minds.' But she hung with us, and she was really funny, man. She was really funny." (Seriously, spoilers ahead.)

A definitive timeline of Superman at the movies
This Week in Genre History: Superman Returns brings back vintage Man of Steel with polarizing results

Ellie has already been suspicious of Chuck (Levi) and Awesome (Ryan McPartlin) as they try to cover up their spy activities. Imagine her surprise when she walks in on her brother macking on Lana Lang.

"Ellie walks in on a very uncomfortable moment between her and Chuck," Lancaster said. "Because Chuck is not actively participating in Ellie's day-to-day life, she had no idea that he was dating this new girl and kind of walks in on a peculiar moment."

Routh's character, Shaw, is about to have an encounter with Morgan, albeit a minor one. "Brandon I got to work with," Gomez said. "Not enough, but we got to work. My interaction with him happens a little later in the season." 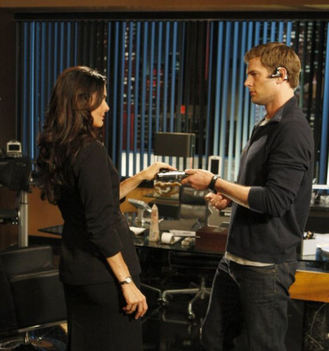 The cast was getting ready to shoot episode 13 of the season when they spoke to us a couple of weeks ago. With the season extended by six more episodes to a total of 19, Lancaster sees the storyline speeding up.

"Essentially, they've taken from the potential season four and looped it into season three," she said. "The writers definitely had a reboot. They knew a few months back now, so there was some kind of recalculating and kind of extending the arc and going beyond. I think 13 does escalate to a certain degree, but then, knowing what they're going to do for 19, they found a way to keep it going."

Lancaster has heard the hints of big things in store for Ellie in the remainder of the season. "Ellie's very ambitious, obviously, and very goal-oriented," she said. "There's some talk of Ellie acquiring a new job that directly interferes with Chuck and Awesome wanting to keep her away from the spy world. This might slam her right into it."

What do you think of Chuck's new girlfriend?