Halloween tricks can range from the TP-ing of trees to flaming bags of poop to soaping windows ... to alien invasions, escaping boogeymen and dancing puppet skeletons. So hold open your goodie bag for the 31st of our 31 specials for the 31 days of Halloween, as we drop 12 SF/horror scenarios set during Halloween next to the nasty-looking popcorn balls from the crazy old lady down the block (and that you're gonna toss when you get home, anyway). 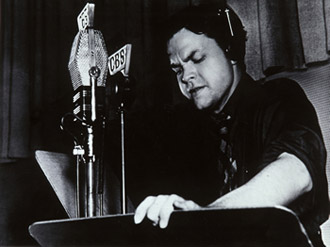 Halloween Eve, 1938. The world is going bug-nutz crazy as the threat of fascism spreads across Europe. In the midst of this, Welles' Mercury Theatre on the Air Rickrolls the airwaves with an adaptation of H.G. Wells' War of the Worlds done up as a live newscast that fools a number of people into thinking that Martians have landed in Grover's Mill, N.J. Orson Welles, as a character, would later show up in a Superman comic, trying to warn people (like the boy who cried wolf) of a real invasion that only Superman takes seriously.

The Lectroids travel across the eighth dimension to Earth 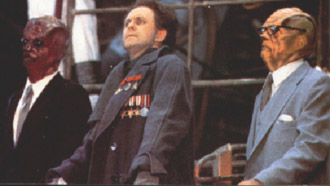 In 1984's The Adventures of Buckaroo Banzai Across the 8th Dimension, it's revealed that Welles' War of the Worlds broadcast was, in fact, not fiction, but a real report about invading Lectroids establishing a beachhead at Grover's Mill. Sound ludicrous? Then ... "laugh while you can, monkey-boy!" 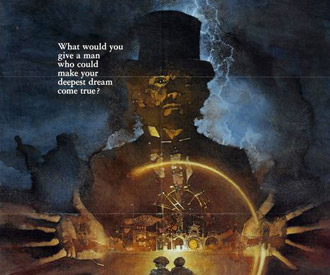 In the 1982 film version of Ray Bradbury's novel Something Wicked This Way Comes, the Halloween season is marked by the coming of an especially creepy carnival headed up a tall lanky guy who looks like the pitchman from those old Infiniti car commercials. Some good creepiness from Bradbury's novel survives ... but the irony of a story about having your childhood ended by an entertainment collective headed up by a ruthless dude filmed by Disney just before Michael Eisner took over the company is a bit much, in retrospect. 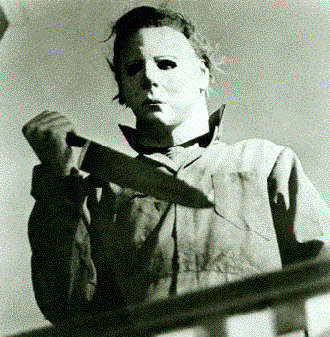 In John Carpenter's Halloween, the slasher movie that created the genre (and which is the best example of the genre), little Mikey Myers escapes from the nuthouse where he's been kept since he was a tyke and returns home for some Halloween carvings that don't include pumpkins. Hard to believe that this one simple "scare the crap out of some teenagers" flick could spawn so many imitations, or that the visage of William Shatner, modified as the mask worn by Myers, could be so terrifying. 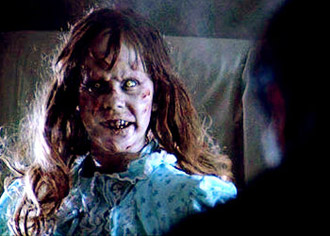 In The Exorcist, as actress Chris MacNeil walks home from an on-location movie set in Washington, D.C., little kids are seen running around her Georgetown neighborhood in cute little goblin costumes. When she gets home, she finds that her little girl Regan has been playing with a Ouija board she's found, and through it has made the acquaintance of a new playmate by the name of Captain Howdy. Soon, after lots of profanity, scary sounds and spurting fluids, kids taking the form of little monsters doesn't seem so cute. 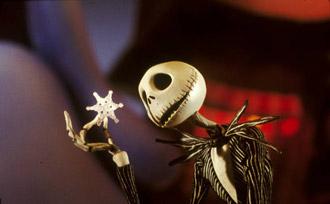 After yet another successful Halloween full of scary fun and surprises, the Pumpkin King Jack Skellington of Halloween Town falls into a funk in Tim Burton and Henry Selick's The Nightmare Before Christmas. Seems that even a cool job like creating all kinds of Halloween fun can become a grind after a while. Like anybody else in a mid-death crisis, Jack decides to take up something new—like hijacking Christmas from Santa. Given his rage over how Wal-Mart treats Christmas, we can't help but wonder what Bill O'Reilly would say.

May Dove Canady makes a friend 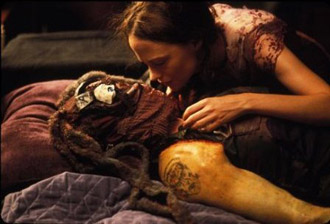 "If you can't find a friend, make one!" is the cheerful refrain of the so-dorky-she's-kinda-cute eponymous heroine of Lucky McKee's May. In fact, she makes one friend out of several in a geyser of neurotic rage that features a great line about a cooler on Halloween night. 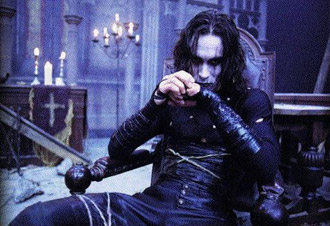 In The Crow's exaggerated and stylized take on Detroit, gangs of bad guys burn down entire neighborhoods on the night before Halloween. Local guitar player Eric Draven gets beaten, stabbed, shot and heaved out the window of his apartment. He's resurrected in a way that leads to the deaths of those who killed him and his fiancée and that also leads to the spawning of an entire industry catering to the willfully disenfranchised that has probably generated millions of dollars for Hot Topic alone.

The Sanderson sisters make a comeback 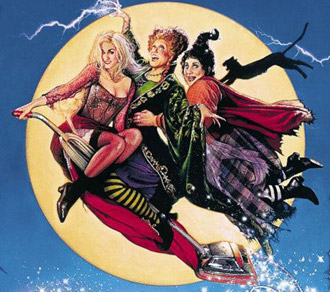 In Hocus Pocus, the evil witch Sanderson sisters, hanged for their nasty habit of sucking the life mojo out of children (upstaging previous nasty work done by another set of three weird sisters who messed with Scottish kings), return after 300 years for some payback. While the setting of Salem, Mass., isn't Manhattan, seeing Sara Jessica Parker as Sarah Sanderson stalking urban streets predatorily is disturbingly prescient. 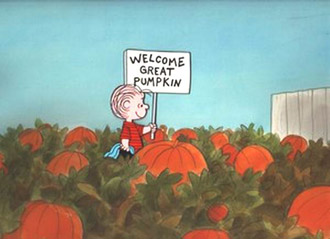 Of course, nowadays a little boy who sucks his thumb, carries a blanket, is horribly bullied by his older sister and writes letters to imaginary beings made of vegetable matter, as Linus does in It's the Great Pumpkin, Charlie Brown, would have a whole rainbow of meds tossed down his gullet. Back in 1966, it was cute. 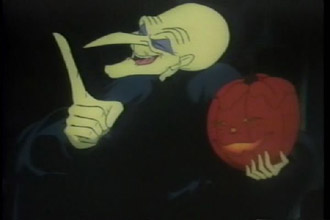 In this pretty awesome adaptation of Ray Bradbury's novel The Halloween Tree, Leonard Nimoy is most assuredly NOT Spock as he voices a weird old dude who instructs a bunch of kids about the history of Halloween. Some true creepiness, as Moundshroud makes a Faustian bargain with some minors.

Teens throw Halloween bash and have séance, with expected results 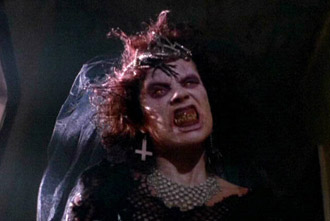 In the late-night cable TV staple Night of the Demons, a bunch of teen stereotypes, who have clearly never seen a horror movie in their lives and have no idea just how killable they are, decide to throw a Halloween bash/séance in an abandoned mortuary. Noteworthy for its use of gore and the most interesting application of lipstick in the history of film.